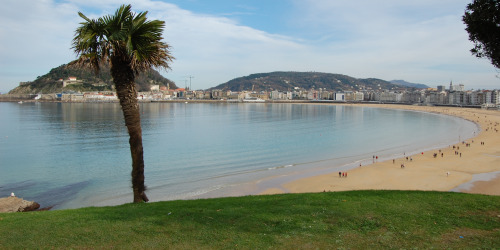 Dubbed as one of the most beautiful Spanish cities, San Sebastian is a quaint and naturally beautiful beachtown. Located in northern Basque country, the charming city is made up of a series of beaches linked together by well-designed boulevards as well as an ecclectic city center. With easy access between the beach and the old quarters, you can hop from one end to another soaking in all that San Sebastian has to offer within a few days. Due to its northernly location, it’s best to visit San Sebastian from Barcelona or on your way to France. There are plenty of things to do in San Sebastian, so it’s best to set aside at least 3 days to explore the city thoroughly.

Most travelers base themselves in the Parte Vieja (Old Town), where most San Sebastian hostels are located. Home to the world-famous pintxos , San Sebastian has built up quite a reputation for itself as a culinary hub in Spain. Whether you’re on a tight budget or a luxury trip, food in San Sebastian will not disappoint.
Start off the afternoon by heading out for some some pinxtos (pronounced “pinchos” in the Basque dialect) in the Old Town. Pinxtos in San Sebastian are a cut above those serves elsewhere in Spain. Delicacies like foie gras, octopus, and lobster often make appearances and are served in two bite portions for just a euro or two each. The street of Calle 31 de Agosto is home to some of the best tapas bars in the city, including La Cuchara de San Telmo. The chef here trained with Ferran Adriá (chef at “The Best Restaurant in the World”, El Bulli) and puts a haute cuisine spin on many of his dishes, elevating them from simple bar snacks to small bites of culinary heaven. Wash the food down with the local Basque Sidra (cider), for the perfect San Sebastian meal.

The next day, let’s head out for a walk in the Old Town. The first attraction to visit is the Ayuntamiento de San Sebastian. Built in the latter half of the 19th century, the San Sebastián Town Hall offers visitors a nice glance at the culture, history, and traditions of this ancient La Concha Bay town. Tours are by appointment only. We then continue on to the Bibiloteca Municipal, the city’s main library. Completed in the 1830’s, this pillared, sandstone building stands in the Plaza de la Constitución and is a beautiful example of Tuscan architecture. At one time, San Sebastián’s bullfights were held in the shadow of the Biblioteca Municipal, and the residents of the surrounding buildings rented out their balconies to spectators.
In the afternoon, head out to the Barrio de la Marina. Located next to Hondarriba, this is one of the oldest areas in San Sebastián. You’ll find an interesting mix of historic buildings, including the Magdalena church. Some of the city’s more noteworthy restaurants and shops are located here as well. Nearby, you’ll also the find the Casa Consistorial de Hondarriba, the Hondarribia Town Hall which dates back to the middle of the 18th century. This baroque building is located on the Calle Mayor.

Whether rain or shine, there’s no better place to be in San Sebastian than on one of the city’s beaches. Less than a 10-minute walk from the outskirts of the city, Playa de la Concha is the main and most popular beach in the center of the bay. Stake out a square of sand and enjoy the sun and sea. Pick up rental kayaks on the slightly smaller Playa de Ondarreta or head to Playa de la Zurriola to surf some great waves (you can also rent boogie boards or take surfing lessons here). All three beaches are connected by a series of promenades where locals and visitors walk hand-in-hand or bike and rollerblade.