While thousands of people make the trip to Rome each year to see the Eternal City’s famous 2,000-year-old ruins, most of them complain at some point during their stay about the absolute crush of tourists. Rome is seriously crowded, it’s true – but if you’re just looking for Roman ruins, you don’t have to go to Rome to see them. In fact, you don’t even have to go to Italy. There are plenty of Roman ruins in Spain, for instance, which will satisfy the curiosity of any history buff.

Those Romans were adventurous folks, and they left evidence of their far-reaching conquests wherever they went – including some parts of Spain. What we now know as Spain was under Roman rule for about 700 years, so it’s not surprising that there are lots of notable Roman ruins in Spain to check out. This is a list of the 6 best-known and most interesting sights of Roman Spain. 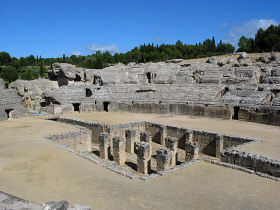 The ruins of the Roman city of Italica are near Seville, and visitors can check out not only the ruins of one of the largest amphitheatres in Europe but also what’s left of several houses. The floors of the houses in Italica showcase one of the trademarks of well-preserved ruins from this era – beautiful mosaics. In the Seville city center there is also a palace, called the Palace of the Countess of Lebrija, to which some of Italica’s floor mosaics were moved – so if you like mosaics and want to see more after touring Italica, be sure to check out the palace. Italica remains an archaeological dig to this day, and it’s already one of the largest Roman sites in the entire country. This Roman city was the birthplace of the Emperor Hadrian. And if you’re already in Seville and you’ve got a taste for both death and Roman history, check out the Roman necropolis in the nearby city of Carmona – it’s the burial place for more than 1,000 Roman families.

>> More information on getting from Madrid to Seville. 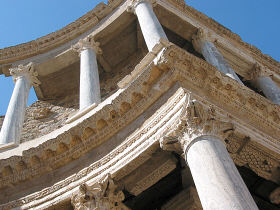 The city of Merida (founded in 25 BC) boasts the most Roman ruins of any Spanish city, including an impressive theatre and amphitheatre which are still in use today for performances during summer theatre festivals. Merida’s Puente Romano is, as the name suggests, a Roman bridge which is also still used today. Other Roman sights in Merida include the aqueduct of Los Milagros, the ruins of a Roman forum, the Alcazaba fort (which has both Roman and Moorish designs on it, as the Moors added to what the Romans had started), a triumphal arch for Trajan, and the columns to a temple for Diana. There’s also a museum in the city that is dedicated to Roman art, and the city itself has been declared a UNESCO World Heritage Site. 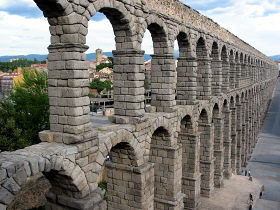 Segovia lays claim to the best-preserved Roman aqueduct in Spain. In addition to being well-preserved, however, it’s also worth mentioning because of its extreme height – at its highest point, it reaches nearly 29 meters. The aqueduct greets you at the entrance to the city, and is such an impressive sight that it’s even used as the symbol of Segovia itself. It dates from the late 1st century AD, and is built (like all Roman aqueducts) without the use of mortar. That fact is impressive when looking at any Roman aqueduct, but it’s particularly impressive when you’re looking at one that’s so amazingly tall – and still intact. The aqueduct is still so strong, in fact, that it is used today to transport water into the city – although these days the water travels along the original Roman channels inside modern metal pipes.

>> More information on getting from Madrid to Segovia. 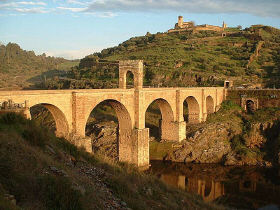 This one-time capital of Spain was also, at one point, very important to the Romans as well. The city’s fortress, the Alcazar, is built where a Roman fortress once stood – but today, visitors can check out yet another Roman bridge that’s still in use. In Toledo, it’s the Alcantara Bridge, so the name isn’t a dead giveaway that it’s Roman – but it is. The city walls you can see are also Roman, although they’re no longer complete. If you’ve got a good imagination, you can also try to visualize what Toledo’s Roman circus might have looked like based on the scant ruins that are left – it’s supposed to have been the biggest one in its day, with a similar style to the famous Circus Maximus in Rome.

>> More information on getting from Madrid to Toledo. 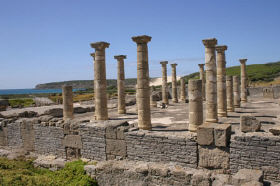 Just to the North of the village of Bollonia on the Spanish Atlantic coast of Andalucia, about 22km from Tarifa, you’ll find what’s left of the Roman town of Baelo Claudia. This city was particularly important during Roman times as a link with Tangier (also once in Roman hands), and Baelo Claudia eventually became an important fish-salting center for the Romans. But the high times didn’t last, as the city was all but destroyed by an earthquake in the 2nd century AD. The ruins that are left include the city’s main street, a forum, a temple, an amphitheatre and an arch at the entrance, and you can even check out what remains of the one-time industrial center – the huge fish-salting pits.

>> More information on getting from Madrid to Tarifa. 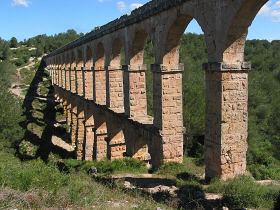 In case you haven’t noticed, there’s a bit of a theme here – the Romans were particularly good at getting water from one place to another, and also at building their water-transportation structures so well that they survive pretty much intact to this day. Just outside the city of Tarragona in southern Catalonia you’ll find yet another example of this, with the city’s Roman aqueduct. The aqueduct is called “The Devil’s Bridge” by the locals (El Puente del Diablo). You’ll find it in the woods a few kilometers to the north of the city, but if you’re not interested in venturing that far you can also visit the seaside Roman theatre right in Tarragona.