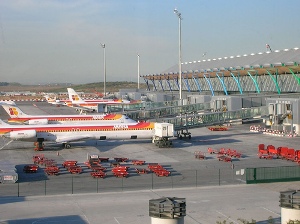 Spain is the third most visited country in the world, after US and France. Most of the visitors come from Europe and are drawn to the beautiful coast (Costa del Sol), the Balearic Islands and the Canary Islands.

There are about 50 airports in Spain, connecting the islands and other remote places to the mainland. Domestic flights are rather cheap which makes air travel affordable for the majority of travelers.

Spain’s busiest airport is Madrid Barajas International Airport. The airport opened in 1928 and continued growing. Currently it’s one of the most modern and most important aviation centers in Europe.

There are currently four terminals opened for passengers (Terminal 4 opened in 2006). There are literally flights to every corner of the world.

Colloquially known as “El Prat”, Barcelona’s airport is Spain’s second airport. It’s an important transportation hub both for international (mostly Europe and North Africa) and domestic flights. A lot of charter companies prefer to use Barcelona’s airport during the summer.

The airport is located at about 10 km / 6 miles from the city. RENFE suburban train links the airport to the city center. A single ticket costs little over €2. It’s important to note that tourists can use T-10 tickets which cost little under €7 for 10 trips and are valid on all metro and bus lines in the city.

Also, Aerobús A1 line connects the airport to Plaça Catalunya. The journey takes about 35 minutes and costs about €4 single ticket.

Out of the five Balearic Islands, three – Ibiza , Mallorca and Menorca- are home to international airports.

Out of the two airports on Mallorca, Palma de Mallorca Airport is an extremely busy one. Over the year a lot of charter flights arrive here, mostly from Europe. It’s the third largest airport in Spain (the largest being Madrid Barajas and the second largest Barcelona Airport) and during the summer it’s one of the busiest airports in Europe.

There are four terminals, out of which Terminal A is mostly used for domestic traffic. The airport serves about 25 million passengers each year.

The airport is connected to the city via city bus line 1 every 15 minutes. A single ticket costs about €2.

All of the seven Canary Islands are home to airports, making air travel the easiest way to get here.

Also known as Los Rodeos, one of Tenerife’s airports, is quite a large airport for such a tiny island. Currently it serves over 4 million passengers each year.

It’s an inter-island transport hub, connecting all the other Canary Islands and also offering flights to mainland Spain, Europe and South America.