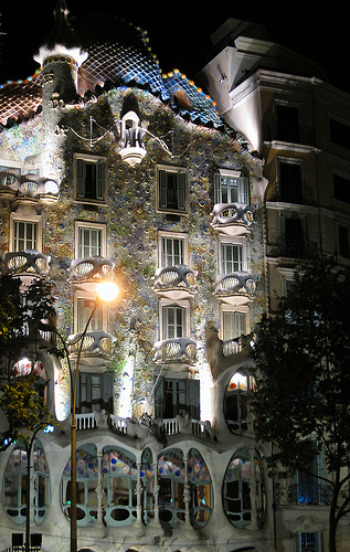 Public art and dazzling architecture are everywhere in Barcelona. The northern city is known as the home of Spain’s famous Art Nouveau architect, Atonin Gaudi and it seems everywhere you look there’s another beautiful building or art museum to explore. Here are some of the highlights of Barcelona, one of the most visually stunning cities in Spain.
Gaudi Architecture
Barcelona tops the list of cities with great architecture, thanks largely to the work of Antonin Gaudi. Several of the masters works are open to the public for tours, including Casa Batllo. Built in 1887, it’s known for the wavy lines of its stone facade, the irregularly shaped windows, and the spiky room that looks like the back of a dragon.
Parc Guell, a  municipal park that offers lovely views over the city, is best known for the colorful mosaics that are found on benches and ceilings throughout the park. The park is free to the public and is also the location of Gaudi’s home, which contains furnture that Gaudi designed.
Of course, the most famous building designed by Gaudi is still left incomplete. The towering Sagrada Familia church has been a work in progress since 1882. Gaudi worked on it for over 40 years, up until his death, yet still never finished it. Visitors who come today can ride an elevator up to the top of one of the spires for dizzying views of the city and an up close look at the intricate stone detailing. To this day, work continues on the building, though the scaffolding that surrounds it doesn’t detract from its beauty.
Though Gaudi didn’t create the whimsical design of the Palau de la Musica Catalana, you’d be forgiven for thinking that he did. Many of the design elements of the colorful and ornately decorated building are similar. Come for a tour, or buy tickets for one the musical performances.
Art Museums
Barcelona’s most famous museum is the Picasso Museum, which is home to the largest collection of Picasso art anywhere in the world – over 4000 pieces. The city is home to several other art museums as well – the Museu National d’Art Catalunya hosts the largest collection of Catalan art in Spain, and the Museu d’Art Contemporani de Barcelona is home to modern art from the 1940’s to the present day.
There are museums in Barcelona dedicated to much more than just art though. Chocolate-lovers will want to check out the Museu de la Xocolate to see masterpieces created out of chocolate and fashionistas will flock to the Museu de Calcat (shoe museum) to see the evolution of the shoe throughout history.
Art in Barcelona is everywhere you look, and this most beautiful of Spanish cities is easy to get to with flights to Barcelona departing from Madrid and most major hubs in Europe several times a day. And hotels in Barcelona run the gamut from cheap, basic hostels, to full-service affairs almost as beautiful as the city’s most famous architectural marvels.
Any trip to Spain would obviously be incomplete without Barcelona being a stop in your itinerary.
Photo by left-handed