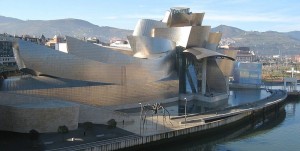 Voted by many as the single most impressive work of contemporary architecture in Spain, the Guggenheim Museum in Bilbao features ecclectic designs and boundaries-breaking styles. The avant-garde building designed by the American architect Frank O. Gehry is the a massive contribution to Spain’s bourgeoning contemporary architecture scene.
Poised along the Nervion River, which runs through the city of Bilbao in the Basque Country to the Atlantic Coast. The Guggenheim is one of several museums belonging to the Solomon R. Guggenheim Foundation and it displays permanent and visiting exhibits of works by Spanish and international artists. Several masterpieces  exhibited here have been signed by artists such as Chillida, David Salle, Jeff Koons, Louis Bourgeois and Robert Rauschenberg.
As one of the most talked-about Spanish museums, the Guggenheim stands out for the contemporary artwork it houses. The museum’s permanent collection concerns 20th century art—traditional paintings and sculptures are a minority compared to installations and electronic forms. The highlight of the collection, and its only permanent exhibit, is The Matter of Time, a series of weathering steel sculptures designed by Richard Serra and housed in the 430-foot (130 m) Arcelor Gallery.
Compared to other great works of architecture in the world, the building has been hailed as a “single moment in the architectural culture” because it represents “one of those rare moments when critics, academics, and the general public were all completely united about something.” The museum was the building most frequently named as one of the most important works completed since 1980 in the 2010 World Architecture Survey among architecture experts.
The museum is open from Tuesday to Sunday from 10 AM to 8 PM and is closed on Mondays. General admission is €10.50 (adult).
For the latest updates and information on exhibitions, visit the official website of the Guggenheim Museum Bilbao.
Photo credit: Wikipedia