Budget Travel in Europe: Flying is an Option 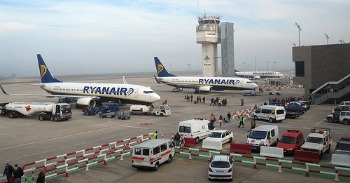 From the European Grand Tour to the crowds of young backpackers flocking to the continent every summer, one of the constants of European travel has long been the trains. It used to be the only way to go, and then it became the budget way to travel. It’s still a great way to get around, and it’s sometimes the best way – but not always. It’s important to consider all your options, and don’t rule anything out because you think it might be too expensive until you’ve actually done the research.
A quick glance at a map, for instance, will show you that your Eurail Pass may not be the best option for getting from Barcelona to Rome. Sure, the two cities are connected by land, but that’s a long route to take. There are ferries that make the overnight trip, but these days the fastest choice also happens to (often) be the cheapest – flying. With the abundance of low-cost airlines in Europe now, it’s fairly easy to find cheap flights between Rome and Barcelona, even one-way.
Within some European countries, train travel is still the easiest method of transportation to use, and it remains an economical choice most of the time as well. In other countries, however, the rail network isn’t as intricate. In Spain, for instance, buses are the best choice for some routes, and with the low cost of many domestic flights in Spain it’s also possible to fly from one city in Spain to another for a reasonably cheap fare.
It’s easy to overlook flying as a way to get from place to place during what’s supposed to be a budget-conscious vacation – flying in other parts of the world is often the most expensive way to go and we’re quick to rule it out if money is tight. But in Europe, budget travelers aren’t forced to stick with ground transportation in order to save money – and in some cases, flying is even cheaper than trains or buses.
The bottom line is that while budget travelers are all quite familiar with money-saving tips like “stay in hostels in Barcelona instead of hotels,” the old wisdom about flight always being too expensive is no longer applicable across the board. It’s important to do your homework on actual prices before you make your transportation choices.
photo by Allplane