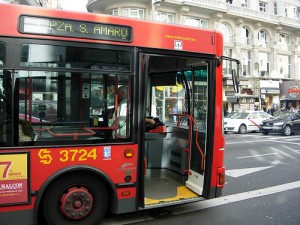 With the large network of budget airlines that fly to Spain and domestic airlines in Spain, flying is one of the best and fastest ways of getting around Spain. The availability of cheap flights on a regular basis is making flying the preferred mode of transport in and out of Spain these days.
But if you are on a tight budget, then bus travel makes an excellent alternative. For those who are seeking to veer off the beaten path and time is not an issue, bus travel in Spain also allows you to explore secret corners of the country at your own leisurely pace.
Spain’s bus network is generally fast, efficient and well-connected.  Traveling by bus in Spain represents one of the cheapest ways to move from one Spanish city to another and buses usually leave and depart on time. Buses are generally not crowded and roads in Spain are in excellent condition, making bus journeys pleasant and comfortable.

Getting to/from Spain by Bus – From Another Country

The cheapest way to get from Spain to another country and vice versa is by bus. It is not only the cheaper alternative to train travel but also, at times, a faster option. Spain is bordered by Portugal and France, with Morocco an easy ferry ride away. Distances from one neighboring country to another is not unbearably long if you’re traveling from the Spanish capital, Madrid or from the border towns.
Portugal:
The cheapest, fastest and most convenient way of getting from Madrid to Lisbon bus transportation is the cheapest and fastest way. Avanza Bus runs a service between these two capitals. There are two departures daily: one at 12:00 p.m. and one at 9 p.m. The journey takes about 8 h 30 min. The ticket price is €50.70 per person, one way. Discounts are available for seniors and children under 12.
France:
The most popular itinerary from Spain to France is getting from Barcelona to Nice. Alsa runs a service between the two cities, with departures almost every half hour. The journey takes between 10 to 12 hours. The ticket price ranges from €54 to €59.
Morocco:
Getting from Spain to Morocco is a popular option for travelers visiting North Africa, but there are no direct buses that cross the straits. You’ll need to catch a bus from Madrid to Algeciras, Tarifa or Barcelona first. From there, there are regular ferry departures to the Moroccan beach town of Tangier.

* Alsa has several bus services to other countries namely Italy, Poland, Romania and Ukraine. Check its website for full details.

Getting Around Spain by Bus – From One Region to Another

Getting Around Spain by Bus – Within One Region

Catching a bus within a region is relatively easy. There is usually no need to book your ticket in advance, unless you are traveling during the holiday season or on long weekends. As regions in Spain are not usually very big, the maximum time travel on a bus within a region is 2 to 3 hours.
For some bus routes that run hourly, you might not even need to print out your e-ticket. Simply bring your passport and show it when boarding and the bus driver will check against his list of passengers.
To find the bus station in a given city, first check around the train station (assuming there is one). Most cities have their biggest bus station near the main train station for easy transfers. You can also check the main plaza in town, as most cities will have a bus stop in or near it.

Getting Around Spain by Bus – Within a City

Many cities in Spain have city-wide bus networks that are relatively efficient and convenient. However, in certain cities like Madrid and Barcelona, the underground metro system might be a better option during peak hours.
Each city has its own urban bus network website, most of them offer an itinerary-planning system where you can enter your destination within the city and find the easiest way to get there on the bus network. Here is a list of some of them: