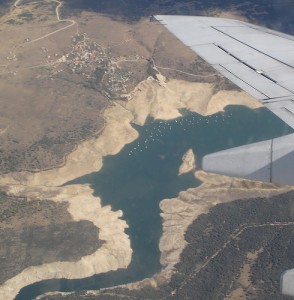 As the capital of Spain, Madrid is the main gateway to the country, providing easy access to the rest of Spain. With a huge network of airlines serving its international airport all year round, Madrid makes an excellent base to explore the country as well as the neighboring countries. If you’re flying from outside Europe, Madrid is most probably your arrival point since most international flights fly here. From Madrid, it is usually a short domestic flight, train or bus ride to your next stop in Europe or within Spain.
Airfares to Madrid also tend to be cheaper than airfares to other parts of Spain, due to the extensive network of airlines that serve its international airport. There are also more airlines to choose from – ranging from budget airlines to world-class freight companies.

Conveniently located in the middle of Spain, Madrid makes for a great jumping point to hop-skotch around Spain. Hoping to see Gaudi’s masterpieces in Barcelona? Want to cool off from the heat along Costa del Sol? How about partying through the night in Ibiza? Whether you are heading south to Andalusia or north to Galicia, Madrid connects all corners of Spain to one single airport. Such conveniences make travel in Spain easy and quick – even if you’re here only for the weekend, you’ll be able to squeeze in a few destinations into your itinerary.

Handling over 40 million passengers a year, the Madrid Barajas International Airport (MAD) is one of the busiest airports in Spain, with four terminals to accommodate the high air traffic. Its fourth terminal only opened in 2006, presenting travelers with a fresh new look and even better services. The airport is eight miles (13 kilometers) from Madrid’s city center, and is accessible via metro. The city’s metro system takes you all the way to the airport terminal one. From there, you can catch the free airport shuttle to the other terminals. Terminal four is slightly further out, so give yourself more time to get there. For those who are here on a layover, there are several world class hotels near the airport.

Arrived in Madrid? Find out more on free things to do in Madrid and recommended day trips from Madrid.