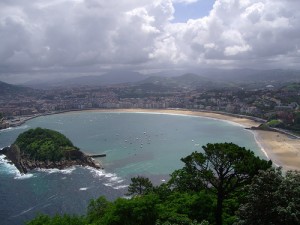 Home to the world-famous pintxos and one of the most beautiful beaches in Spain, San Sebastian has built up quite a reputation for itself. Despite its location tucked way north in the Basque region of Spain, it is well worth the long journey to experience some of the country’s finest.  The region is home to one of the highest concentrations of Michelin-starred restaurants in the world, and the highest in Spain. Whether you’re on a tight budget or a luxury trip, food in San Sebastian will not disappoint.
Most travelers stay in the old part, Parte Vieja, where the city’s cathedral and museums are located. You can thus find the highest concentration of hostels in this area. Alternatively, if you’re looking to enjoy some sunshine, then hostels along its popular city beach, Playa de la Concha, would be perfect to soak in the best of both worlds. This beach lies in the center of the bay, connected to two other beaches by a series of promenades.
Start searching for cheap San Sebastian hostels from the search engine below.

Search this map to find cheap hostels in San Sebastian