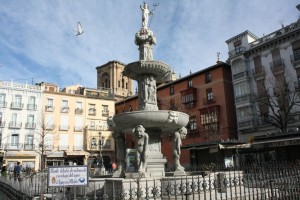 As one of the most popular travel destinations in Spain, Granada is best known for the world famous monument, the Alhambra. But besides the Alhambra, you’ll find there’s plenty to Granada than the ancient Moorish palace. Studded with quaint white-washed houses, sun-kissed alleyways and hill-top ruins, Granada is often dubbed as one of Spain’s most beautiful cities. When Bill Clinton came to visit, he said the sunset at Granada’s Mirador de San Nicolas was the most beautiful sunset he’d ever seen. Once you make your way here, it’s easy to see why Mr Clinton fell for the charm of Granada.
The historical center of Granada is small and compact, packed with charming architecture and characteristic flair. The Albayzin, Granada’s old quarters, is a labyrinth of steep slopes and winding paths. It is often the most popular place to stay for both budget travelers as well as luxury travelers. There is a wide array of Granada hotels in this area, ranging from simply 2-star guesthouses to high-end luxury hotels.
The only downside is the steep terrain. Older travelers might find it inconvenient as staying here means plenty of climbing up and down these cobble-stoned slopes. But for those who are fit enough, you’ll be rewarded by the unobstructed panorama that many of these hostels offer.
In the search engine below, enter your travel dates and you can start searching for cheap hotels in Granada. Click on each of the hostels to read more about them and see photos of your preferred hostels. The map below will show their locations clearly.

Search this map to find cheap hotels in Granada