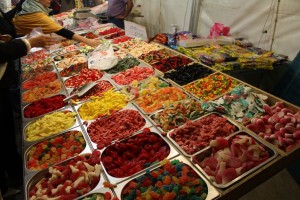 The main Christmas market in Madrid can be found in Plaza Mayor, one of Madrid’s main public squares. It starts on 28th November each year with an official opening on 5th December. The market is open from 10 am until 9 pm every day right through until early January – remember that the Spanish Christmas only ends on the 6th January, the Day of Epiphany (Dia de los Reyes Magos). In fact, you’ll be surprised to find that the busiest times at this market is after the 25th December and right before 6th January.
Madrid’s Christmas market has been going since 1860 and many of the stall holders still sell the traditional Belén nativity figures alongside fancy dress costumes, joke items and tinsel wigs ready for Fools’ Day on 28 December. Another Christmas market worth visiting is the one located at Plaza de España. This handcraft market is organised by the Community of Madrid and is smaller in scale but offers a distinctive myriad of goods on sale. There are more than 150 stalls from 60 different towns and provinces. Ceramic, glass works, leather goods or imitation jewellery are sold here.
The streets of Madrid will be covered in Christmas lights, but the most spectacular displays can be seen on Madrid’ main street Gran Via, the nearby Calle Goya and Calle Ortega y Gasset. The various El Corte Inglés department stores also boast the most elaborate Christmas decorations in the city.
While visitng these markets, most people also make a visit to the nearby churches and chapels to admire the wonderful nativity scenes. The most extravagant belen is the 18th century Neapolitan display found within the Almudena Cathedral in the Royal Palace of Madrid, Palacio Real. Other Nativity scenes nearby can be found in the Royal Monastery of the Encarnación or at the Monastery of the Descalzas Reales and at Iglesia de Jesucristo de los Santos de los Últimos Días in Moratalaz.