City of Arts and Sciences in Valencia 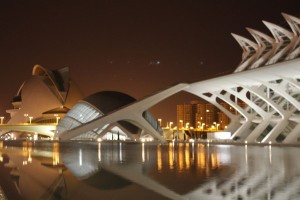 The latest addition to Spain’s collection of museums and contemporary architecture is the City of Arts and Sciences in Valencia. Better known as Ciutat de les Arts i les Ciències in Valenciano, it is a mega entertainment-based cultural and architectural complex housed in an extraordinarily futuristic and modern complex. Only opened in 2005, the complex is fast becoming the biggest landmark of Valencia city and dominating the city’s skyline. Today, it has become one of the most important things to do in Valencia for tourists.
Designed by the two most famous Spanish architects, Santiago Calatrava and Félix Candela, the complex underwent the first stages of construction in July, 1996 and the finished product was opened on April 16, 1998 with the opening of L’Hemisfèric. The last great component of the City of the Arts and the Sciences, El Palau de les Arts Reina Sofía, was officially inaugurated on October 9, 2005, Valencian Community Day.
The City of the Arts and the Sciences is situated at the end of the old riverbed Turia and is set amidst emerald greenery and the mishmash of modern buildings that make up Valencia’s commercial district. The area is home to Valencia’s best hotels and shopping malls. Its clean-cut and white-washed facades are the most attention-catching features of the City of Arts and Sciences. Like most of Santiago Calatrava’s works, the complex features streamlines, futuristic designs and cutting-edge technological applications. At the City of Arts and Sciences, you don’t only indulge in the educational and entertaining museum experience but also the aesthetic and artistic perspectives that the complex portrays.
The massive complex is made up of these components: