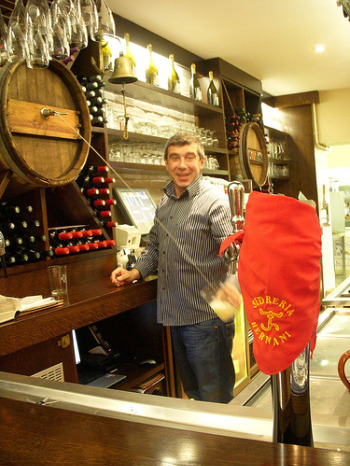 On our first night in the Basque town of San Sebastian, in northern Spain, I watched in awe as a bartender lifted what looked like a bottle of white wine, high above his head, and then let its light gold liquid cascade down into a glass on the bar. I asked the bartender about the drink, and thus began my education in the Basque drink of sidra, or cider.
The Basque cider, referred to as “natural” is a still (not carbonated) alcoholic cider with a tart, vinegary taste.  It is made from several varieties of apples and has an alcohol content of about 4%. It’s been produced in the Basque region for at least 600 years and is a very traditional drink, enjoyed around the region at bars, restaurants, and at local cider houses. There are nearly 60 of these cider houses producing the drink in the Basque region, many of them in the town of Astigarraga, which is easily accessed by car from San Sebastián.
Producers begin harvesting the apples that will make the cider during the end of September, and continue on through mid-November. Throughout December and into January, they’re hard at work extracting the juice from the apples, fermenting it, and getting it ready to drink by mid-January. The tasting period begins then and lasts through April. This is the best time to visit the region. Though many cider houses are open for lunch or dinner all year-round, the tasting season is the only time you can come and taste the fresh cider right from one of the giant production barrels.
The meals offered at these cider dinners are basic – the menu usually includes a cod omelet to start, veal or beef for the entrée and cheese, honey, and walnuts for dessert. The meal is served family-style at communal tables and has a set price (usually 25-30 euros) that includes all the cider you can drink. It’s not just brought to you in a glass though. The process for getting your drink is a lot more fun.
Just wait for the server to give the call of “txotx!” and then get in line for a taste poured directly from the barrel’s spout. There’s even a special way to hold you glass. Put it down around knee level and let the liquid cascade into it from above. This method of pouring allows the liquid to aerate, which releases its aroma and enhances the flavor. It can get a bit messy though and you’ll be damn with cider spray by the end of the meal, so be sure to wear casual clothes.
If your visit falls outside of the tasting season, you can visit a traditional cider house for a meal and just enjoy the drink from a bottle. Barkaiztegi, on the outskirts of San Sebastián and has been producing cider since the 1600’s and served cider meals all year round. There’s also a cider restaurant in the heart of San Sebastián’s Old Town. Sidrereia Donostiarra serves traditional cider house meals with options a la carte, and serves cider by the bottle. Bars and cafés all around Basque country, including San Sebastián.
Photo by giraffesneedvacationtoo