Festival of San Fermin: Running of the Bulls 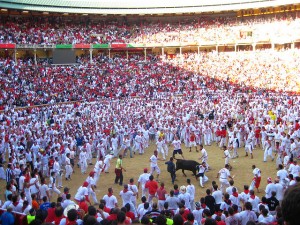 The annual San Fermin Festival kicks off this week in the town of Iruña, Pamplona. It is most well-known for the Running of the Bulls – an event where revelers from all over the world run in front of a ferocious herd of  bulls. The event attracts over 1,000,000 spectators each year, all vying to catch a glimpse of the action. Besides this attention-catching event, San Fermin is also celebrated with parades, such as the Gigantes y Cabezudos (giant-sized and giant-headed characters). Dancers and street performers also take to the streets, along with folklorical music playing in the background.

When is San Fermin Celebrated

Each year, the San Fermin celebrations kick off at 12 noon on the 6th July. The opening ceremony sees the skies exploding with the setting off of the chupinazo pyrotechnics. The rocket is released at the city hall balcony, along with cheers from the enthusiastic crowd. The actual Running of the Bulls event, also known as the encierro, takes places on the 7th July, which is also the biggest day of festivities. Thousands of people parade along the streets of Iruña’s old town, accompanied by a replica of the statue of Saint Fermin. The celebrations, feastings and partying only ends at midnight of 14th July, with the singing of the emblematic song of melancholy, Pobre de Mí (translated to mean ‘Poor Me’). 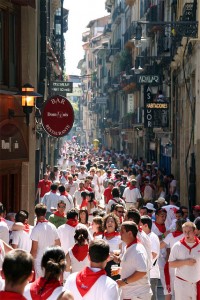 San Fermin is a traditional Spanish festival that has been celebrated since the 14th century. Held in honor of Saint Fermin, the co-patron of Navarres, the region in which Pamplona is located, the festival started out as a medieval events. In fact, the origins of the festival came from a combination of two different medieval events: One was a summer commercial fair held by cattle merchants, and the other was a religious event held to honor the saint. In 1591, the two were combined and held on the 7th July to take place in Iruña.
Today, the festival is one of the most famous Spanish festivals, partly thanks to Ernest Hemingway, who documented his San Fermin experience in his book, ‘The Sun Also Rises‘. Ernest Hemingway was a fan of bullfights and the running of the bulls, impressed by the spectacle during his first visit in 1923.

Running of the Bulls

The main bullrunning event is a dangerous and controversial one: Since 1925, 15 people have been killed either due to falls or being trampled by the bulls. Each year, over 200 to 300 people are injured. As a result of it, a massive group of protestors march naked each yearl, to protest against animal cruelty, in a bid to ban the event.
Before the event starts, the participants gather at the start of the route to pray for protection. Before the statue of Saint Fermin, the runners would chant three times, asking for safety. At 8am sharp, the first firecracker is lit up, announcing the release of the bulls. A second cracker then signals that the last bull has left the ranch. The entire run lasts an intense 3 minutes, where participants and bulls dash towards Pamplona´s main bullfighting ring.
The third cracker is released when all of the bulls have entered the ring. The bulls will stay in the ring until the bullfight events start in the afternoon. To signal the end of the run, a fourth firecracker is lit.
To get the latest updates or watch live broadcast of the San Fermin events, go to the festival’s official website.