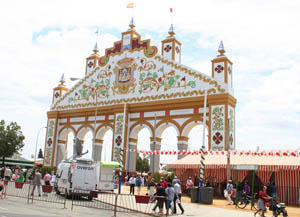 When you think of the festivals in Seville, what comes into your mind? Perhaps you think of the think of the passion of Latin, the powerful bull fighters, flamenco and obviously the famous Don Juan.
Seville is the real quintessence of the Spanish nature, character and its literary richness which are ideally represented in various festivals. As the staging ground for some of Spain’s most unique festivals, Seville is definitely worth a visit for its vibrant festivals. Colorful and fascinating, these traditional festivals bring out the finest of the city’s character as individuals dress to the nines in the most grandiose ways and appear in the open to rejoice life as well as its colors.
Here, we will give you a preview of the festivals of Seville.

The festival formally celebrated two weeks following the Semana Santa Festival. The festival depicts the Passion of Christ. Initially, it was only a cattle market. But in some years’ time, the locals changed the nature of the festival into more celebratory, grand and pompous. Today, feria revelers are greeted by a massive gate lit up in fluorescent colors and rows upon dizzying rows of made-shift stalls selling sweet wine, tapas and local produce. The event is some sort of carnival, with funfair games on offer – rollercoasters and thrilling theme park rides. 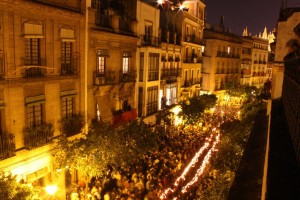 Corpus Christi festival is one of the most significant religious events in Seville. This is a fair of the Catholic Church which honors the Eucharist. It is an incredibly dedicated religious event and one that is as well observed with joyful events. On the morning of the festival, the streets and houses of Seville are adorned with flowers. In the church, a mass is held where you can see small boys in gold and red, identified as the ‘Seise’, performing a traditional dance in addition to singing. The effigies are carried throughout the lanes in a parade starting from the gateway of San Miguel cathedral at early in the morning. This festival takes place annually on June 13. 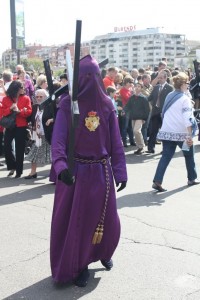 Biennial of Flamenco Art or the Bienal de Arte Flamenco

Home to Spain’s most famous performing arts, flamenco, it is no surprise that Seville is the host for the biennial of flamenco art. This festival happens on even years. Held for two month (September and October), the Biennial of Flamenco Art is an outstanding musical event that overwhelms the soul and heart, giving a interesting cultural and musical feast in order to inspire everyone.

During the festival the entire city stops in order to celebrate.  The Holy Week is celebrated in tremendous vigor especially here in Seville, Spaniards and tourists from all over the country flock here to witness the grandeur of the parades and celebrations. In admiration to Christ as well as the Christian devotion, about fifty various groups parade through the streets of Seville carrying ornamented effigies of Virgin Mary or Christ. The event is quite a somber event, giving travelers an interesting peek into the religious side of the country. The Spaniards are largely Catholic, and their devotion to the religious can be seen from the effort and time put into preparing for the week-long festival.