Free Things to do in Barcelona 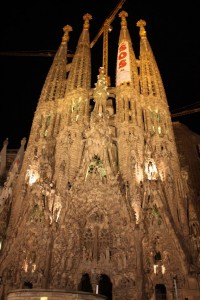 Best known for its vibrant beach culture, flamboyant nightlife and contemporary art scene, Barcelona is a city packed with interesting sights and activities; but as the second largest city in Spain and one of its richest, Barcelona is not a cheap place to visit. Next to Madrid, it is the second most expensive travel destination in Spain. Budget travelers will find it hard to keep your money from flowing with the high restaurant prices and hostel rates. But like any other European destination, if you look hard enough, you’ll be surprised by the multitude of free things to do in Barcelona.
With a Mediterranean coast, an exhibition of color on every surface, never-ending palm trees, and the unmistakable Spanish-Catalonian flair, Barcelona is an energetic city that promises you fun, without burning a hole in your pocket. Here are a few of free things to do and see in the Catalonian capital city of Barcelona:

This one-mile stretch is an enthralling boulevard of people and sound, color and aroma. You’ll find everything from fabulously designed buildings to outgoing street vendors. The packed assortment of businessmen, wanderers, and street performers create an eye-catching mixture of activity. Most cheap Barcelona hostels are located near La Rambla, making it an excellent base to explore.
Beware of pick-pockets, but don’t let the hustle startle you away from the unbeatable energy. Instead, imagine La Rambla as an ongoing street fair giving Barcelona the right amount of panache. Stop in La Boquería, the open-air market, on your way down the strip to grab a snack. The irresistibly mouth-watering fruit (that seems to stay in season all year ‘round) alone is worth it: whether you buy a handful of kiwi or purchase a cup of freshly squeezed juice pineapple, the price stays low and the satisfaction hits an all-time high. And if you’re not hit by hunger pangs by then, strolling through the market itself is a feast for the eyes.

In honor of Barcelona’s most famous resident, Pablo Picasso, the Museu Picasso was created to house an enormous collection of his work. Although not originally from Barcelona, Picasso spent a good portion of his life in the city. This particular museum distinguishes itself from others by showing not only Picasso’s most famously bizarre pieces, but many of his early paintings as well. The museum is set up as a chronological art gallery, starting with his original work and moving through his life to his final paintings; viewers are given the chance to see the artist’s unique progression through his art. Also on display are exhibitions presenting the works of artists similar to Picasso. Entry is free only on Sundays, be sure to get there early to avoid the long lines.

The large hill overlooking the city once acted as host to the Olympic summer games. Now it remains a not-to-be-missed site for tourists hoping to get a panoramic view of Barcelona as well as the chance to discover more of its history and culture. What’s best is its proximity to the city centre – from Plaza de Espana metro station, you can easily walk or catch a bus to the attractions in Montjuic. Its myriad of attractions is impressive: from the National Palace to the Olympic stadium and Botanic Gardens. Of all its places of interest, the Magic Fountain is one of the most enchanting sights. Engineered by Carles Bugas, the artistic element used in designing the fountain is the changing shapes of water. With Palau Nacional as its backdrop, the fountain lies on a raised platform, creating a beautiful and majestic sight, especially in the evenings.

Of all of Gaudi’s world-famous masterpieces, Park Guell is the most popular and is also the only free place to visit. Although often mistaken as just a park, Park Guell is more of an artistically and architecturally magnificent display, including a few foresty pathways, a large terrace showing off Gaudi’s mosaic-like patterns, a handful of colorful statues, and two unique kind Gaudi-inspired buildings. Freelance artisans often sit along the winding bench, selling jewelry for as little as 2€; whether or not it’s truly hand-crafted, a pair of painted glass earrings serves as a beautiful reminder of the remarkable Spanish setting. You’ll forget that you’re still in an urban city when standing in this magical story-book scene.

Also situated in Montjuic, Barcelona’s Jardi Botànic (The Botanical Gardens) is one of the finest – for its array of vegetation and its poetic setting on the hilltop of Barcelona. If you’re looking for a patch of greenery or an escape the hustle and bustle of cosmopolitan Barcelona, this is one of the most relaxing and tranquil spots in the city.  Here, you’ll find a plethora of plants and trees from all over the world, which are classified accordingly.  Offering one of the best views in town, the Botanical Gardens might not be easily accessible – beware of steep steps, but it’s definitely well worth the effort.

Every Saturday, the modern beachfront boulevard of Port Vell is transformed into a bustling antique fair – rows upon rows of porcelain, old lace, costume jewelery, coins, antique cameras, records, military memorabilia and collectibles are on display. For antique lovers, this is a must-see, especially since its entry is free. The fair starts at 10am and shops close around 8pm.