Free Things to Do in Seville 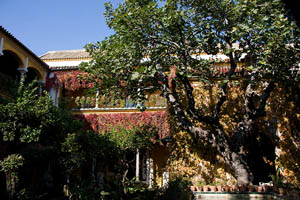 Even though the city of Seville is small compared to the size of Barcelona or Madrid, this southern metropolis of Spain is filled with attractions. The city brags with top-notch art museums, scenic neighborhoods, grand cathedrals and historic palaces.
A lot of these attractions are situated in the business district, at walking distance from each other. And what’s great is the fact that several of them are free to visit. Some places are free to visit only on special days (and at special hours).
So we have put a list together of the things that you can do for free in Seville:

It is located near the Plaza de Pilatos. The building dates from the 16th century and was built by blending the Spanish Mudejar style and Italian Renaissance. Admission here is free every Tuesday only from 1pm to 5pm. During the rest of the week, there is an admission fee of €8 and an extra €5 for the gardens. So, if you want to save during your travel, visit this wonderful fortress on its free admission day.

Although access to the Giralda Tower is not free, access to the adjoining Cathedral de Sevilla is without charge. And this is not just an ordinary cathedral. It is the biggest Gothic edifice in the whole world and the third biggest cathedral on the continent of Europe; St. Peter’s of Rome and St. Paul’s of London are bigger than Seville’s Cathedral.

Situated at the northern part of the Cathedral and west of the Plaza de San Francisco, the admission fee for this head office of antique documents is free. Archivo General de Indias was built from 1584 until 1646 which mainly adds texture to its name.

Established in the old Convent of Merced Calzada, since the start of 17th century, the museum’s collection includes artworks from the Gothic era all the way through the 20th century. The collections have merged over its history, thanks to the religious items that were sold, publicly acquired and privately donated. It has various rooms where you can see fantastic works by artists like Alonso Cano, El Greco, Velasquez and Pacheco among others. In addition, remarkable religious paintings of Zurbaran are also exhibited in the museum.
Museo de Bella Artes is regarded as one of the best museums of Spain and second to the Prado of Madrid. The entrance fee is free to visitors that hold EU passport and €1.50 for regular passport holders.

This is a beautiful neighborhood if you wish to do nothing at all. It was once a Spanish Jews ghetto and now it serves as a place to walk, get lost and enjoy the city. There are winding lanes which open in small plazas. Flower-packed windows give shade from the brightness of the Andalusian sun.