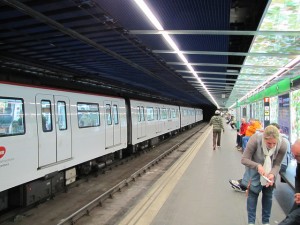 Barcelona is Spain’s second biggest city in both area and population, with its attractions scattered all over various corners of the city. To get around the city, your best bet would be to take the public transport than walk around the city.  Stretching from the old city centre, Barri Gotic, to the modern, futuristic beachfront boulevards, Barcelona has a wide range of interesting sites worth checking out. To explore more of the city, Barcelona’s transport network comes into use. Here’s a quick guide on Barcelona’s transportation system.

Modes of Transportation in Barcelona

Barcelona is a massive metropolis that spreads from the beach to the inland districts; to get from one end of the city to another, you’ll need time and patience, especially when traffic is a factor. The historical center, where most tourists tend to base themselves around, is rather compact and accessible by a network of transport system. But as many of Barcelona’s attractions are located in different corners of the city, you’ll probably have to use the public transport sometime during your trip. The information below will help you find your preferred option to get to and from your hotel or hostel in Barcelona.

Connecting various districts in Barcelona underground, Barcelona’s metro system is relatively efficient and well laid out. Although smaller in scale as compared to the Madrid metro system, this underground network is relatively well-planned and provides easy access to all corners of Barcelona. Morning office hours see massive throngs of crowds dashing all over the station. To avoid the crowd or delays, catch the metro on weekday afternoons.
There are over 11 lines in the metro system (and more new ones in the process of construction). Differentiated by numbers and colors, the metro lines might look like a complex spider-web network, but once you get the hang of it, you’ll find it easy to navigate. Major districts, museums and places of interest are all connected via the metro. However, the metro system doesn’t go to the airport, the best way to get there is via Aerobus.
A basic Metro ticket costs €1.35, and you can buy them at Metro stops through the cashier or automated machines. In addition to the basic Metro tickets, there are also daily tourist passes, called “Tourist Transport Season Ticket” (Abono Transporte Turistico). These cost €5.80 for 1 day, €10.70 for two, €14.30 for 3 days and so on. You can purchase these passes for up to 5 days.

Barcelona public buses are comfortable and easy to use. If you are tired of catching the metro or if you are looking for a relaxing ride around the city, then the bus would be an appropriate option. Traffic, however, can be problematic, especially during peak hours.
There are buses from the city center to all corners of the city. Within the city, it is usually faster to take the metro than the bus. But if your destination is outside the city, then your only choice is the bus or train. There are over 100+ bus lines, and 50 over nocturnal bus routes. On the bus network website, you can also use the online planner to figure out the fastest and best way to get to your destination.

In relation to other Spanish cities, Barcelona taxis are rather expensive, considering the high meter rate. The taxi meter starts at a basic rate of €1.85. There is a €5 .35 surcharge to/from the airport, and further supplements on weekends or holidays. There is an extra charge of €1 for each suitcase. It costs approximately €30 to get from the airport to downtown Barcelona, depending on traffic. If you are taking the taxi within the city center, you shouldn’t have to pay more than €10 during the day. (Night charges are higher).
Taxi drivers in Barcelona are generally trustworthy and always use the taxi meter. There are plenty of taxis in the city center; it shouldn’t be difficult to find one. When calculating the travel time, you must take into consideration the narrow streets and traffic congestion within the historical center. At peak hours, it might be faster taking the metro than taxi.
>>For help getting into the city from the airport, check out your options for how to get from Barcelona el Prat Airport to downtown Barcelona (and return).
Photo credit: Flickr photo by misviajes.CO