Getting from Barcelona to Tenerife (and return) 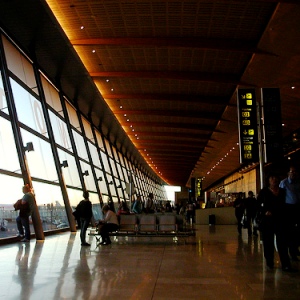 The Canary Islands are one of the most sought after holiday destinations. Tourists flock here on their honeymoon or just to experience the lovely weather and soak up the atmosphere. During the day, spend your time on the beach or checking out the national parks, while at night you can enjoy the clubs. Tenerife is the biggest island in the chain and very popular among European travelers.

If you plan to get from Barcelona to Tenerife, the only option to travel non-stop is to catch a domestic flight.
Tenerife is served by two airports: Tenerife South (Reina Sofia) near Los Christianos and Tenerife North (Los Rodeos) near La Laguna. Both airports are served by Spanish and European carriers.
The following carriers offer direct flights between Barcelona and Tenerife: Clickair, Air Europa and Iberia. The flight time is about 3 h 30 min. Most carriers offer daily flights, while others offer at least 4 flights per week (Clickair).
The fare depends a lot on when you book the ticket. For example, booking your ticket one month prior to departure means you’ll be paying at least €170 per person, RT on Air Europe (economy class) and up to €235 per person, RT on Clickair (web fare). If you manage to get your tickets two months in advance, expect to pay around €225 per person, RT on Clickair (web fare).
Many times, even if you book your ticket couple of days before departure, there are chances to find an affordable flight.

By ferry via Cadiz

If you want to get to Tenerife by ferry, firstly you need to get to Cadiz. There’s a ferry each week from Cadiz to Santa Cruz de Tenerife and it takes 2 days to complete the journey. The RT price varies between €610 per person in a 4 berth cabin and over €1000 per person in a 2 berth cabin.
Search here for ferries: