Getting from Bilbao to San Sebastián (and return) 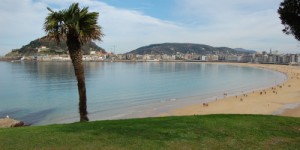 Located in northern Basque Country, the charming city of Donostia-San Sebastián (official name) is made up of a series of beaches linked together by well-designed boulevards as well as an ecclectic city center. With easy access between Bilbao and San Sebastián, most travelers who make it to Northern Spain combine the two cities in one trip. After visiting the famous Guggenheim Museum in Bilbao , relax on the beaches of San Sebastian and tuck into its world-renown pintxos.
Located in the far north-central part of Spain, both Bilbao and San Sebastián are a short distance from Barcelona, a popular base for most travelers. Depending on how far in advance you are planning the trip, you can choose either the train, bus or driving yourself to get from Bilbao to San Sebastián and vice versa. There are no flights from Bilbao to San Sebastián.

The Spanish national rail, Renfe, doesn’t operate the Bilbao-San Sebastián route. Basque Country has its own local train network, known as Euskotren. There are hourly departures and train tickets are reasonably affordable. It takes approximately 2hours 30minutes, much longer than the bus. Check the Euskotren website for tickets.

The buses from Bilbao to San Sebastián are run by Alsa . The journey takes slightly more than 1 hour and buses leave every hour. Check Alsa website to book the tickets in advance.
Tickets cost between €7 per person , one way on a normal bus. They are cheaper than the trains and are much faster.

If you prefer the independence of driving, renting a car in Spain is a convenient and fast way to travel. The 100km between Bilbao and San Sebastian can be covered in an hour via the A8 road.
Here’s a map (with the shortest route marked) to help with directions: