Getting from London to Ibiza 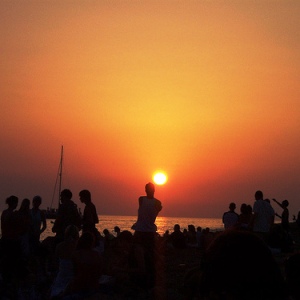 Ibiza is a summer destination for many travelers. The sun, sand and partying attracts youngsters like a magnet. Many travelers flock here for the incredible party atmosphere and great clubs. What many don’t know is that the island is chocked full of secret coves, pristine beaches and rich local culture. The cheapest and most popular way to get to Ibiza is via London as the European hub provides a lot of low-cost links to other European cities.

The most common way to get from London to Ibiza is by plane. London is a major European hub and plenty of low-cost carriers provide links to Ibiza.
Easyjet offers daily flights from three airports: Gatwick, Luton and Stansted. If you book your flight about 3 weeks in advance, the cheapest combination would be to fly from London Luton to Ibiza and back from Ibiza to London Stansted for price as low as £61.87 per person. Although generally speaking, the farther in advance you book, the cheaper the flight will be, in EasyJet’s case it’s not true. If you want to book 2 months in advance you will have the surprise to find out that a RT flight will cost even up to : £74.87 per person.
Ryanair offers three flights a week (Tue, Thu and Sat) from London Stansted. If you book your ticket a month in advance expect to pay at least £146 per person, RT. If you manage to book the flight two months in advance, the price can be lower, but at least £126 per person, RT.
Other carriers which offer non-stop flights between London and Ibiza are: Thomsonfly, British Airways, Monarch Airlines and First Choice. The prices are much higher than the low-cost options (starting at £158.50 per person, RT on British Airways).
Start searching for flights from London to Ibiza here:

For many it may come as a surprise to know that it’s possible to travel between London and Ibiza without setting foot in a plane. Well, it is, but you’ll be making several stops on the way: