Getting from Madrid to Paris 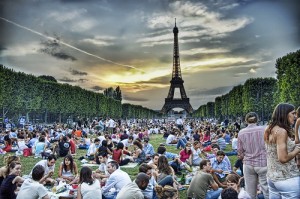 France makes an excellent side-trip from Spain, thanks to its proximity. Combining both Spain and France in a trip allows you to experience two very distinctive cultures and countries without spending too much time or money on commuting from one destination to the next.
There is so much to do in both countries that the best way would be to slowly take your time and wander around small towns and cities. But for those with a tight schedule, traveling directly from Madrid to Paris would be a great way to get to see the essential sights of both countries and save time at the same time.
Besides traveling direct from Madrid to Paris, there are other ways to get from Spain to France, such as going from Barcelona to Nice.

Flying is the cheapest way to get between Madrid and Paris, due to the large network of budget airlines that fly to Spain. Howvever, if you are not short of time and you’re looking to explore various parts of both countries then you might want to choose to take the bus or rent a car.
Both capitals are served by airports and there are plenty of carriers offering flights between Madrid and Paris. Madrid’s Barajas Airport is easily accessible by either bus or metro, while Paris’ Charles de Gaulle airport is well-connected to the city center so getting from the airport to the hotel is an easy task.
>> How to get from Madrid Barajas Airport to downtown Madrid
>> How to get from Paris Airport to downtown Paris
The best part is that several budget airlines fly from Madrid to Paris and viceversa. The flight takes 1h 10 min – 1 h 20 min. There are numerous flights per day, with the cheapest and most frequent flights from Easyjet and Ryanair (flies to Paris Beauvais Airport instead). Airfares can be as low as €8 excluding taxes if you book in advance.
Other companies serving the two cities include LAN Airlines and Air France. Prices can be as low as €51 per person, RT, including taxes for an economy class ticket but it does depend on whether you are willing to travel on early morning flights or not.
Start searching for flights from Madrid to Paris here:

There are four trains that go from Spain to France, amongst which only one goes from Madrid to Paris.  The Trenhotel Francisco de Goya has daily departures, taking over 13.5 hours to get there. The train departs Madrid Chamartin train station at 7pm every day and arrives in Paris city center at 8.30am. Train fares range from €222 to €376 departing on the class of seating. The luxury train is equipped with a restaurant, cabins with in-room bathrooms and beds. To book the ticket, you can get them on RENFE’s website.
Besides this route, here are other trains that go from Spain to France. All of these trains are overnight, taking over 13 hours and costing in the range of €100 to €500 each way – although if you book early, you can usually find some promotions.
1.) Trenhotel Joan Miró (Barcelona França to Paris)
2.) Catalán Talgo.– (Barcelona França to Montpellier and vice versa)
3.)  Mare Nostrum (Lorca Sutullena to Montpellier, returning to Cartagena)

Alsa Bus runs a service between Madrid and Paris. The bus departs from the two main bus terminals in Madrid and brings you straight to Paris Gallieni bus terminal. There is only one departure each day, at 8.30 p.m from Estacion del Sur and 8.45 p.m. from Avenida de America. The journey takes about 16 h 30 min, arriving at 1pm the next day. The ticket price is €73 per person, one way. Discounts are available for seniors and children under 12.
The most popular itinerary from Spain to France is getting from Barcelona to Nice. Alsa also runs the service between the two cities, with departures almost every half hour. The journey takes between 10 to 12 hours. The ticket price ranges from€54 to €59.

Renting a car is a good idea if you prefer to have freedom and want to travel by road. The driving distance between Madrid and Paris 1268km (788miles) and the journey takes about 12 h 20 min.
Here’s a map to help with the directions: