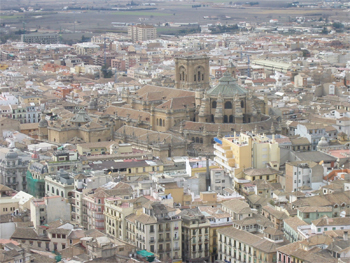 One of the most precious gems of Spanish civilization can be found in the heart of Andalusia. Located in the southern reaches of the Sierra Nevada mountain range, and an hour north of the Mediterranean Sea, the city of Granada welcomes visitors with warm temperatures and delicious gazpacho. Occupied by the Greeks, the Romans, the Byzantines, and perhaps, most noticeably, by Moorish rulers who reigned for seven hundred years, Granada exists as a collaborative masterpiece of culture and splendor.

You can’t throw a stone in Granada without hitting an important cultural landmark. The Alhambra is certainly one that you cannot miss. To see the Alhambra is to see nature and art come together in astonishing perfection. The Muslim Palace offers a unique historical perspective with its culturally and artistically intricate designs. Also, be sure to visit la Capilla Real, the tomb of the Catholic Monarchs, Fernando and Isabel, who reclaimed Granada from Moorish forces and helped to fund Christopher Columbus’s voyage in 1942. Another important piece of architecture is the renaissance masterpiece—Cathedral de Granada, located near the commercial streets in the city center. 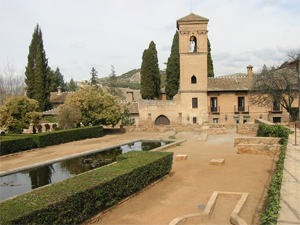 The Corral de Carbon (the ancient Muslim Market) and the Alcaiceria (the ancient Silk Market) exude Arabic influence that still meanders through narrow passways, lined with exotic merchandise and spirited citizens. During sunset, visitors and locals follow the meandering passways, through the cerca-XIV-century Moorish architecture of the Albaycin Barrio, up to the Mirador de San Nicholas, to socialize and take in an awe-inspiring view of the Alhambra.

Federico Garcia Lorca Granada Jaen Airport (GRX) is 23 minutes away from the city center but various shuttle bus companies (prices ranging from 3-15 EUR) or car rentals at the airport provide transportation to Granada. Taxis from GRX to the main city cost about 20 EUR.

There are a variety of places to stay, varying in price range and style, that exist in convenient locations around Granada. The Hotel Saray, for example, has beautiful rooms, great facilities and central location (18 minutes walking distance from the Alhambra.) However, a double room for two people is €60 a night. For travelers who like a bargain, there are many inexpensive Granada hostels that provide comfortable rooms, a great location, and a beautiful view of the Alhambra for both families and groups of friends. There are also hotels in Granada and short-term-apartments that have prices ranging down to €37 a night.