How to Impress a Spanish Girl 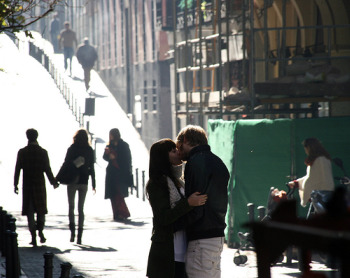 So you’ve fallen in love…or at least in lust…with a Spanish girl. How can you impress her? Well, it depends on where the lady of your dreams hails from.
Spanish culture is as diverse as the country’s terrain. From the Basque region to the north, down to the sizzling Southern islands, each area has different values and traditions so your approach may differ slightly for each one. Here are a few ways to catch the eye of a Spanish woman.
Be Stylish
Style in Spain is less about labels and designer names and more about good quality clothing and an impeccable fit. You don’t need to drop loads of cash on clothes, just buy a few well-made pieces and wear them with confidence to attract a Spanish girl.

Wine and Dine Her
In the Basque country of northern Spain, fine food is a very important part of life. There are more Michelin-starred restaurants concentrated in this area that almost anywhere in Europe and many of the local men belong to prestigious cooking clubs. Eating isn’t just about survival here, it’s about enjoying the sensual pleasures in life, and a man who can create delicious meals for his partner is surely a catch.
Show Off Your Macho Side
Spanish girls are certainly independent, but that doesn’t mean they don’t like a guy who can take charge. Particularly in southern Spain, bullfighting is alive and well, along with the tradition of the brave and daring bullfighter. That’s not to say a Spanish girl wants you to boss her around or be chauvinistic, but showing her your more manly side is sure to impress.
Of course, the best way to impress a woman, Spanish or not, is to be yourself. If she isn’t charmed by your own brand of humor, intelligence or kindness, maybe it wasn’t meant to be anyways.
Photo by JFabra