So far, 2008 has really been a great year for Spanish sports fans. This is especially so for a country that seems to be perenially on the back burner when it comes to many of the world’s top sporting events. I mean, Spain has some of the top soccer clubs in Europe, but they’ve yet to win a World Cup even once.

Here’s a brief recap of a few of the highlights from Spain’s sporting triumphs in 2008 – but remember, the year’s not over. In fact, we’ve got the Olympics coming up shortly. What else do Spain’s athletes have in store for us?

I know what some of you are thinking. You’re either thinking, “That says Italy, not Spain,” or you’re thinking, “Wait, what the hell is that?” Well, it’s Italy’s answer to the Tour de France, and is one of three premier cycling events that take place every year. Italy’s version runs each May and lasts roughly three weeks – and in 2008, a Spaniard won it. His name is Alberto Contador, and he’s also the cyclist who won the Tour de France in 2007. Contador is from a town called Pinto in the Madrid province (where he still lives), and is the first Spaniard to win the Tour de France outright since the great Miguel Indurain won it five times in a row back in the 1990s. (Spaniard Oscar Pereiro was awarded the 2006 title after the winner, American Floyd Landis, tested positive for testosterone.) Indurain is also the last Spaniard to have won the Giro d’Italia in 1993. And at the ripe old age of 25, Contador undoubtedly will continue bringing smiles to the faces of Spanish cycling fans for years to come. 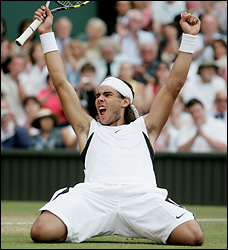 Even people who aren’t tennis fans will know the name of one of the world’s most famous and prestigious tennis tournaments. Wimbledon dates back to 1877, and is the only Grand Slam tennis tournament still played on grass courts. Players are required to wear white, and the traditional stadium snack is strawberries and cream. How much more sophisticated can you get? It’s one of those tournaments that every tennis player dreams of winning, and yet the Wimbledon trophy has been held aloft by only two Spaniards in the mens singles category. The first was in 1966, and it was a man called Manolo Santana. The second was just a few weeks ago, and it was a man called Rafael Nadal. He beat the reigning champ and five-time winner Roger Federer in what became the record-setting longest finals match ever played at Wimbledon – and what’s more, Santana was in the stands to see him do it. This is, of course, after also beating Federer earlier this year at the French Open. Nadal is a young’un at only 22, and hails from Manacor on the island of Mallorca. He’s clearly made a name for himself after his big Wimbledon win this summer, so all eyes will be on him the next time he picks up a tennis racket. No pressure or anything, Rafael.

Better known as Euro 2008, this year’s European soccer (okay, football) tournament began with people talking about who the favorites were. With only 16 teams competing, it’s not a long list of countries to choose from – but despite the strength of the Spanish team they were often written off by sports analysts who repeatedly talked only of the many times they’d choked in similar tournaments just when it really mattered. As mentioned before, this is a country with some spectacularly good clubs, but which has never won a World Cup. Additionally, Spain had only won the European Football Championship once before (in 1964) – that is, of course, until this year. The Spanish football team nearly walked all over the competition from the get-go, even winning handily when they were resting many of their best players. They never lost or even tied a game (unless you count the one against Italy, but they then beat the Italians easily on penalty kicks so it’s hard to really think of that one as a tie after all), and fully deserved to hoist the Euro trophy.

So, what Spanish sporting triumphs did I miss?