Almost no matter what time of year you’re visiting Madrid, one interesting way to pass the time is people-watching in the city’s busy public squares. And when it comes to busy public squares, there are two to choose from where the people-watching is great and the scenery isn’t bad, either – Plaza Mayor and Puerta del Sol. These squares are more than just the metaphorical heart of Madrid, they are really at the city’s center. 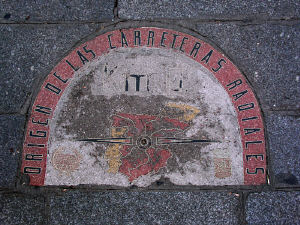 We’ll start with this square, because it’s not only one of the busiest places in the entire city of Madrid, it’s also considered the center of the entire country. And even if it’s not literally the center, it might as well be – this is the point from which all of Spain’s major roads originate, in the sense that Puerta del Sol is kilometer zero for all the roads in the country. Originally, this square was where one of the many gates to Madrid was located, and an image of the rising sun decorated the gate (hence the name). Today, the Puerta del Sol is home to a statue of Charles III, a statue of a bear with a madrone tree (the symbol of Madrid), and the city’s old Post Office. The Post Office building is now an office building, but nearby you’ll find the plaque in the pavement marking the center point of Spain. This area is popular with tourists because of the many nightlife hotspots around it as well as the number of hotels and hostels within sight of the square. Getting to the Puerta del Sol is easy, because there’s a Metro stop (called Sol) right underneath it. 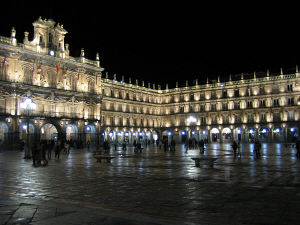 This square is more traditional-looking than the Puerta del Sol, because it was actually built as a public square rather than being considered one only after it was already a popular meeting place. Plaza Mayor was built in the 17th and 18th centuries during the Hapsburg era, and it’s only a few blocks from the Puerta del Sol. It’s a big rectangle and it’s surrounded by beautiful buildings full of what one assumes are extremely expensive and extremely pretty apartments. While the square has been known by several names throughout its history, it’s been known as Plaza Mayor since the end of the Spanish Civil War in 1939. And while today it’s a lovely place for a stroll and some good people-watching, the Plaza Mayor has been the setting for some gruesome events in the past – including bullfights and public executions. In addition to the high-end residences on the upper levels of the buildings surrounding it, the street-level businesses that ring the Plaza Mayor are mainly shops and cafes that have been there for ages. While Puerta del Sol is probably busier, Plaza Mayor is more enjoyable from a tourist’s standpoint. It’s easy to reach via the Sol or Opera stations on the Metro.