Geographically, Spain is shaped almost like a square, with regions easy to locate and spread out evenly throughout the country. Bordered by Portugal to the west and France to the northeast, Spain is considerably large (second largest country in Europe) and occupies a significant part of the continent. Located at the southernmost tip of the European continent, it is just 14km away from the African continent, making travel from Spain to Morocco (and other parts of North Africa) extremely convenient and easy.

Here is a map of Spain, with its major cities pinned out for you: 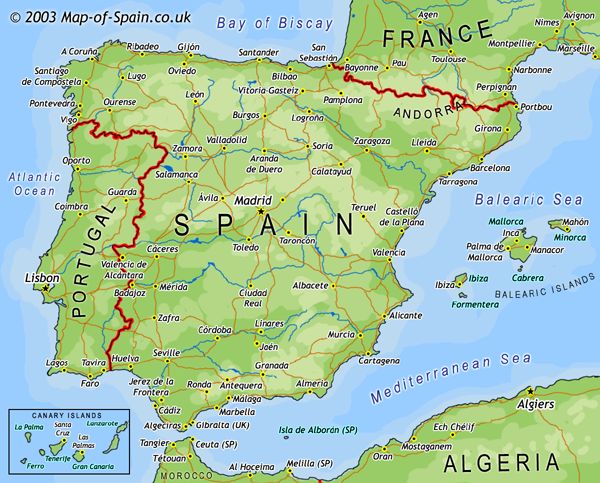 Obviously, this map is not designed for any specific use besides a general reference point. If you’re going to be renting a car in Spain, you’ll want to get your hands on a good driving map or download the Spain map on your GPS before departure. If you are already in Spain and decide you want to rent a car and take day-trips to explore the region, you can always pick up a good regional map in the tourist office or at your hotel – these will be the most detailed, and best for driving, because they only cover a small area of the country. They’ll often have roads marked that no other map has, and which you might not otherwise take.

To see the regions of Spain clearly, here is another map:

Spain is divided into 17 regions as seen above (not include Ceuta and Melilla on the African continent). Madrid, considered a region on its own, is right in the heart of the country. Stretching all across the southern coast is Andalusia, the birthplace of flamenco, bullfighting and many of the country’s cultural traditions. To the east is the region of Catalonia, with Barcelona is the Catalonian capital famed for its beaches, food and modern art. In the north lie the regions of Galicia and Basque Country – offering a starkly different side to Spain that few tourists see. Each region has its own distinctive cuisine, language and traditional festivals.

Most travelers make it a point to visit Madrid, Catalonia and parts of Andalusia. These are the highlights of the country, and are covered in most Spain vacation packages. But for those with time to spare, it’s advisable to slowly find your way through offbeat trails and small villages; you’ll be surprised to find a multi-faceted country. If you’re still in the process of planning your itinerary, here are someitinerary ideas for 10 days in Spain.