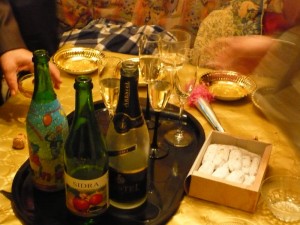 The Spaniards are best known for their festive parties and hedonistic indulgence. New Year celebrations are no exceptions – expect phenomenal feasting, plenty of dressing up, drinking and partying till dawn.
From Christmas Day till the Three Kings’ Day (Dia de Los Reyes Magos) on 6th January, the celebrations almost don’t stop. Streets are lined with shops, lights and festive mood, while supermarkets rack up the prices of essential New Years foods.
If you are travelling to Spain during this holiday season, be sure to search for your flights to Spain in advance (prices get way high!) and prepare for some overloading of Spanish food and drinks! To prepare you for the epic New Year’s celebration, here are some things you should know about New Years in Spain before you go.

New Years in Spain might be quite pricey depending on your plans – prices at the hottest party spots are likely to rise and entrance fees for the cotillones de nochevieja can cost anything between 50 to 200 euros per person. Expect Spanish hostels prices to be higher than usual in major cities on New Year’s Eve. Also, expect most restaurants to close on New Years Day – either scope out a place in advance that will be opened, or stock up on picnic items beforehand and plan to “eat in” that day.
If you’re spending the whole holiday season, read more about Christmas in Spain.