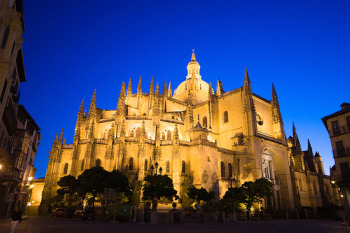 Madrid is a bustling  metropolis, a transportation hub in the center of Spain, and an important center for commerce and art in the country. Although the Spanish capital is packed with attractions, museums and renown tapas bars, it can be easy to feel overwhelmed by the hectic traffic and highrises. If you want to get out and explore more of the surrounding area, you’re in luck. There are several easy, worthwhile day trips from Madrid, including three UNESCO World Heritage Sites.

Segovia is about 2 hours by train from Madrid, and is another UNESCO site. Because it’s a bit further away from Madrid, many people come for an overnight trip, or visit the city on a tour through Andalusia. If you’re pressed for time though, you can get a good taste of the city in an afternoon. Segovia’s main attraction is its 1st century Roman aqueduct, an engineering marvel that brought water to the city in ancient time. Azoguejo Square provides a great vantage point for viewing the aqueduct.
Segovia’s Alcázar is its other main attraction. It was the site of ,of King Philip II’s wedding and is currently a museum. It was also known as the inspiration for Cinderella’s castle in the Disney cartoon. 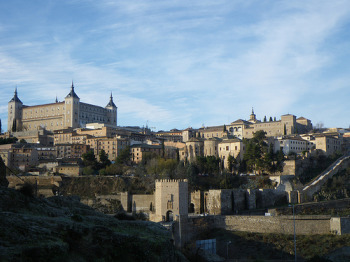 30 minutes by train from Madrid, Toledo is a walled town set on a hill and surrounded on three sides by the Tagus River. The town is a UNESCO World Heritage Site and the main draws are its old city walls, narrow alleyways, historic churches, and cobbled streets. If you just want to wander around, eat some marzipan (which the town is well known for), you’ll be fine with 2-3 hours in town. To see more of the sights, plan on closer to a full day. Trains run often and you can buy your tickets at the station, but be sure to check the schedules.
In Toledo, you can visit the 15th century Cathedral to see paintings by Titian, Goya, Raphael and El Greco, who lived in Toledo throughout his later years. The Juan de Los Reyes Cathedral and the Jesuits Church will delight any architecture buffs, as will the Alcazar castle, which was nearly destroyed in 1936 and then rebuilt. You can also walk along the defensive ramparts of the city walls.
The town is known for its excellence in crafting swords and you can find ornately designed ones for sale all over the city. Merchants will ship them directly home for you, as carrying one on board your flight home obviously isn’t an option. Ceramics and a gold and black enamel, often used to make plates and spoons, are also popular souvenirs.

El Escorial, about 45 kilometers from Madrid, is the third UNESCO World Heritage Site near Madrid. The town is known for being the location of Spain’s largest monastery, the Royal Monastery of San Lorenzo de El Escorial.
The monastery was originally created in the 16th century by King Philip II as a mausoleum. The grounds now contain a museum, basilica, library, and living area and are full of gilt-bronze sculptures and art from masters like Titian and Tintoretto. El Greco’s work, “The Martyrdom of St. Maurice” is housed in the Chapter House and the remains of Phillip II and his parents, Charles V and the Empress Isabel of Portugal, are entombed on the grounds.
Photos by madcowk, Eole