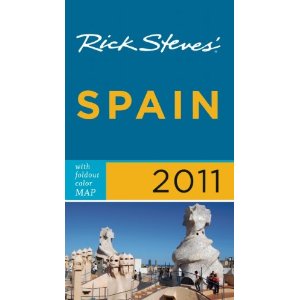 Most travelers know about Rick Steves‘ Europe travel guide books and his long-running series of travel programs on public TV. Each episode of the TV program highlights a particular city or small region, so obviously no one season can contain every country in Europe. For the 2011-2012 season, there’s a big emphasis on Spain.
There are 10 new shows in the 2011-2012 season, and three of them feature destinations in Spain. The Spain episodes (including descriptions from the Rick Steves people) are:

There’s even a bonus extra on the DVDs that you won’t get when the episodes air – it’s Rick Steves’ European Insights and European Travel Skills Lecture.
These episodes are beautifully done, as Rick Steves shows always are, and are very good at inspiring wanderlust. The entire 2011-2012 season is on two DVDs for a total of more than five hours of shows. You can buy your own set (either for yourself or as a gift) for just $24.95.
But wait!
We’re happy to announce that the fine folks at Rick Steves’ Europe Through the Backdoor have provided us with a copy of the 2011-2012 season of Rick’s shows to give away to one lucky WhyGo Spain reader.
To enter, leave a comment with your best Spain travel tip, which we may use in a future post. Never been to Spain? Ask a question instead and we’ll be sure to answer. We’ll draw a winner on 10 January 2011 from all entries received before midnight EST.
Thanks again to Rick Steves’ Europe Through the Backdoor for supplying us with this great giveaway, and be on the lookout for the Spain episodes when they air on your local TV station – or get the DVD set for yourself!