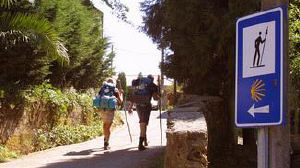 Santiago de Compostela is the name of a town in northwest Spain, but when you hear travelers talking about it they’re usually referring to the medieval pilgrimage route that ends at that town’s cathedral. So even though the route is technically called the Way of Saint James, or the Camino de Santiago, you’ll probably hear people talking about walking the Santiago de Compostela route as well. No matter what you call it, it’s a popular hike and a reason many people come to this part of Spain.

The city of Santiago de Compostela is in Galicia. The entire city is a UNESCO World Heritage Site, and boasts a beautiful historic center and a university which was founded in the 16th century. It’s the city’s cathedral that has long been its main attraction, however, and the end point for one of the most popular Christian pilgrimage routes. 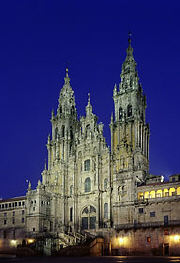 Inside the Santiago de Compostela Cathedral is said to be the burial place of Saint James the Great, one of the 12 apostles, who (legend says) came to the Iberian Peninsula preaching the gospel before being killed in Jerusalem in 44 AD. The legend continues that his remains were brought back to Galicia and a church at Santiago de Compostela was constructed to hold the holy relics in the 9th century. The present-day cathedral dates from 1075, and the holiness of the relics interred there has been debated – a Papal Bull in the 1880s gave them the official seal of approval, but the Vatican today doesn’t sound as convinced. That doesn’t stop tens of thousands of people from making the pilgrimage to the cathedral every year.

Whether you’re walking the Camino de Santiago or just visiting Santiago de Compostela, you can enjoy a noon mass for pilgrims held every day in the cathedral. This Pilgrim’s Mass allows those who have received their compostela certificate to say where they’re from and where they started their pilgrimage.

Since the time when the remains of St. James were placed in the first church in Galicia in the 9th century, the location has been the destination for the Way of Saint James. El Camino de Santiago was, during medieval times, one of the most important Christian pilgrimages a person could make. While the destination is always the same, there are actually a few routes by which people can get there. Some of the routes are more popular and more well-traveled, and the route itself has also been added to the list of UNESCO World Heritage Sites.

The Routes
There are four routes which date back as far as the 12th century and which are listed in the Codex Calixtinus, essentially a guidebook for pilgrims on the Way of St. James. Today, there are several routes one can take to get to Santiago de Compostela. You can read about the various routes on this page, but the main routes are discussed on this page. 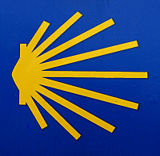 One of the primary symbols of the Camino de Santiago is the scallop shell, as this is also one of the symbols of Saint James himself, and you’ll find lots of shell-related souvenirs to buy along the route and in Santiago de Compostela itself. In centuries past, in the years before walking the Way of St. James was a tourist activity, pilgrims would know which houses and hospices along the route would offer shelter and food to pilgrims by the scallop shell outside the door – and pilgrims would wear a scallop shell to be identified as pilgrims.

Today, the official symbol of the Camino de Santiago – as well as the city of Santiago de Compostela – is a stylized scallop shell in yellow on a blue background. You’ll see this symbol marking your route as you walk. 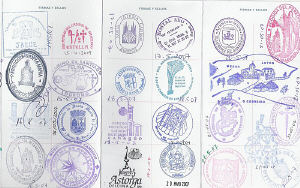 In addition to these scallop shell symbols, which you’ll still see along the Way of Saint James route, many pilgrims will purchase what’s called a credencial – it’s like a passport, and showing it at places which accept the credencial will sometimes give pilgrims one free night’s lodging and free food. If these aren’t free, they’re generally offered at a reduced rate. And be sure to get your credencial stamped, because a fully-stamped “Pilgrim’s passport” entitles you to a compostela certificate at the completion of the trek showing that you covered the required amount of ground.

For more information: See the main Santiago de Compostela city tourism website (including information about the Way of St. James), this Santiago guide, the official site of the cathedral, the webcam in the town square outside the cathedral, a pictorial guide to the pilgrimage routes, a wiki created by pilgrims for pilgrims, and this guide for walking the Camino de Santiago.