Should I plan a winter vacation in Spain? 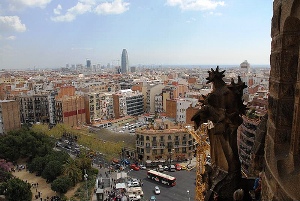 Winter might not be the perfect time to come to Spain if you want to work on your tan, but there are quite a lot of things to do. Yes, on the mainland it’s cold during winter. It can even snow. But if you dress accordingly, spending you day checking out the sights won’t make you freeze. And you can always take a break and enjoy a hot tea or coffee in one of the restaurants in the cities.
Weather
Expect rain and overcast days pretty much all over the country. In general, the weather in winter is quite unpredictable. Madrid is a good example for that. One year, January can be bitter cold and the next one it can be mild. And the same is true for the entire winter. Temperatures in January in Madrid range from 0C/32F during the night to 11C/52F during the day.
Barcelona’s climate is a mid milder but it’s still cold during the winter. It should be quite dry though. Temperatures in January in Barcelona range from 4C/39F during the night to 13C/55F during the day.
On the other hand, the Balearic Islands are blessed with a different climate. During winter, the weather is mild and a bit rainy. In Mallorca, the temperatures in January range from 5C/40F during the night to 15C/59F.
>>read more about Weather in Spain
Getting to Spain
Unless you want to fly during the winter holidays (Christmas and New Year), flights to Spain are easy to find and affordable. If you fly from Europe, you are able to choose among the many low-cost carriers which serve the country. On the other hand, if you fly from Northern America you can either look for direct flights into Spain or book a flight into a big European hub (Amsterdam, London, Paris) and then fly into Spain.
Spain’s capital, Madrid is served by a large airport which receives flights from all over the world. Especially during the low season (winter), cheap flights to Madrid are easy to find. Plan to fly mid-week and book your ticket in advance.
Barcelona is another major hub, being served by a large international airport and two other smaller airports. Flights to Barcelona are available from all over the world. If you fly from Europe on a low-cost carrier, you’ll most likely land on Girona rather than the international airport (El Prat).
Where to stay
Just like in the case of flights, accommodation in Spain is quite cheap during the winter if you avoid the holidays and don’t plan to go skiing (although it is possible to find affordable ski deals in Spain).
Hotels in Barcelona and Madrid are cheaper in winter than during the peak travel season (summer) but you should remember that in big cities the rates don’t vary too much from season to season. However, you should be able to find affordable places to stay close to the city centers.
Skiing in Spain
Spain is Europe’s second most mountainous country. While most travelers know Spain as a beach destination, we should also remember that it is possible to ski in Spain. The best resorts are in the Pyrenees. There are a lot of destinations to consider when you plan a ski vacation in Spain.
Photo credit