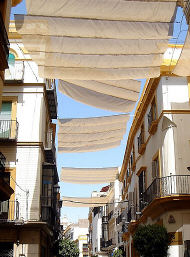 Whereas in some parts of the world, the end of summer is when the temperature finally reaches a point where people want to spend the day outdoors, August in Spain can be downright unbearable during daylight hours. If you ever questioned the whole “siesta” concept in Spain, you’ll understand it completely when you spend the month of August in the country!

In addition to being the hottest month of the year, August is also the month in which most Spaniards go on vacation. This is true not only of Spain, but of many European countries – and unlike other parts of the world, for most Europeans the August vacation month means just getting out of the cities and heading for the coast or the mountains within their own country. And Spain in August is no exception – residents take the opportunity to leave the often brutal city heat and cool off on Spain’s beaches or mountain resort towns.

What does this mean to you, the tourist? Well, that depends on where you’re planning to spend your vacation. If you’re hoping to make like the locals & enjoy the beach life, you’ll need to book well in advance – hotels and hostels in Spain, not to mention campsites, can be full to overflowing in August. And if you think the accommodation options are packed, just check out the beaches – finding a spare bit of sand for your blanket may be a challenge, but you certainly won’t lack for company!

On the other hand, if you’re going to be visiting the cities in August, you may find many shops and restaurants either closed down entirely for the month or with dramatically shortened hours so that people don’t have to be out & about or working during the hottest parts of the day. This doesn’t mean that you won’t find any cheap hotels in Barcelona, for instance, that remain open during August – there will always be places for you to stay, eat, & shop in Spain’s biggest tourist cities, regardless of how empty the city might be. But keep in mind that the locals leave for a reason – the cities can be just so unbearably hot that trying to accomplish all your sightseeing to-dos during the day will feel more like torture than a holiday. There’s a reason dinner and most entertainment options start so late in the evenings.

Of course, if you’re visiting the northern parts of the country, August is actually one of the best times to go – the Santiago de Compostela, for one, is nearly ideal in August.

The weather in Spain in August will vary depending on where you are, but you can expect the center and south of the country to be hotter. The hottest cities, like Madrid and Seville, can reach temperatures of more than 110F (43C), while the beaches will probably only get to 100F (37C) and mountains in the north will only get to around 85F (29C). The bottom line is that in August in Spain, there really aren’t any “cool” spots.

Some of the festivals which take place in August in Spain are: