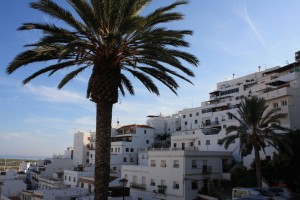 It’s sizzling hot, streets are empty, everyone’s on the beach and even shops are closed in the middle of the day to escape the heat. Welcome to Spain in the heart of summer! Now that temperatures have soared sky-high, most Spaniards take refuge along the coastline or in the pleasantly cooling highlands, while tourists flood to its shores for a slice of sunshine. Prices along coastal cities are highest at this time of the year, with the tourism industry pushing up prices of hotels, flights and food.
July in Spain sees summer in its full glory, with temperatures hovering around 35C (92F) and the daylight stretching past 9pm. Along the coast, tourists and locals alike are out basking under the sun, enjoying a sangria or two by the seafront; while further inland, major cities appear desolated, emptied out of its usual residents who have flocked to the coastline for a respite.
Tourism in Spain reaches its peak each July. Although Spain in July is jam-packed with tourists, there’s no better time to see Spain than in summer when it’s bathed in sunshine and radiating with a glow. July is also the best time to visit Northern and North-Eastern Spain when temperatures are pleasant. Rain is however expected, so be sure to carry an umbrella wherever you go.

One of the most famous Spanish festivals in history, San Fermin is celebrated in Pamplona with the unusual practice: Running of the Bulls. Thousands of people gather to witness the event each year, as gutsy men dare one another to run in front of a huge troop of raging bulls.

The biggest rave party in Spain is held annually in the deserts of Fraga, Huesca. Dance till dawn with over 22 hours of music from various genres – electron, techno, hiphop etc.

Yet another important music event in Spain, this major jazz festival has an impressive lineup of performers in the likes of Elvis Costello and Patti Smith. Held in various venues through out the city, it’s guaranteed to sweep you off your feet.

A massive event for mainstream rock and pop music lovers, Benicassim showcases over 100 artistes each year, with names like The Prodigy and Ian Brown gracing its stage.

Each July, this traditional practise of dancing on stilts known as Danza de los Zancos is held in the small village of Anguiano. Dancers move in a tight motion, carrying a figure of Virgin Magdalena, down the village’s cobblestoned paths.
Photo by Nellie Huang.