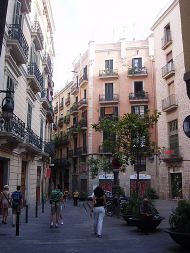 After the extreme heat of August, the somewhat cooler temperatures that come with September in Spain can be a welcome relief. Much of the countryside can look parched and dry early in the month before the rains come, but the harvest festivals which are common in the fall will make up for the barren-looking landscapes. Besides, you’re likely to be able to get better deals on cheap flights starting in September, and that’s always a plus.

Keep in mind that although getting to Spain might not cost you as much after the height of the busy summer travel season, September in Spain is also when the locals are heading back to work after their own summer vacation. Those seaside resorts aren’t just open for foreigners – Spaniards like their coastline, too! And because the massive Spanish crowds head back to the cities after August, you may find that some resorts actually close down in September, or scale back their offerings dramatically. Be sure to check with any resort you’re thinking of staying in to make sure the place won’t be completely dead when you’re there in September.

Spain weather varies depending on where you are in the country, but on the whole you can count on lower temperatures in September than in August! The average high temperature for most of Spain in September is just over 78F (25C), while the average low is a little over 62F (16C). Remember that those numbers are averaged out over a huge land area, however, so you’ll want to find out more about the specific cities you’re going to be visiting and what their climate is like in September.

As mentioned the fall is the start of the harvest festival season, and many of those festivals revolve around grapes and wine. Some of the festivals which take place in Spain in September are:

If you’re visiting Spain in September, also keep an eye out for the Spanish version of the Tour de France – it’s called the Vuelta a Espana, and it’s a three-week bike race around the country. Even if you’re not near one of the towns the race is passing through, you can still enjoy the spectacle – just find a bar that’s showing the race on TV and help the locals cheer on the Spanish riders.