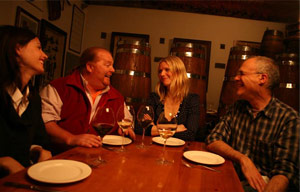 So, I don’t know if anyone is watching the new PBS program, “Spain… On the Road Again,” but although I couldn’t make it through an entire episode I thought I’d give it a mention here. For one thing, the show’s getting a crazy amount of press (especially for a PBS special that doesn’t have the name Ken Burns attached to it), and that’s despite it having some serious drawbacks.

The series purports to follow food icons Mario Batali and Mark Bittman, along with actresses Gwyneth Paltrow and Claudia Bassols (a Spanish star), on a foodie trip around Spain. As Batali explains in the opener of the first episode, he and Bittman had planned this trip (and the show) for just the two of them, but when he mentioned it to his “buddy” Paltrow she said she wanted to come along. Facing the possibility of having only one gorgeous female sidekick for the two less-than-gorgeous men involved, someone decided to harness Bassols into coming along as well.

Now, the premise of the show – four people road-tripping around Spain in search of good food – has all the promise in the world of being interesting, beautifully shot, and mouth-watering. But from the get-go, the show has problems. And the problems are such that for me, someone who doesn’t have a ton of time to spend in front of the television anyway and doesn’t feel like wasting any of that time on something that annoys me, it just wasn’t worth it to sit through even the entire first episode. Here are the main things that bugged me:

I’m not the only one with issues about this show. Miss Expatria lists the things that annoy her (along with several things she liked about the show), and some of the people I read on Twitter also were unhappy with it. It’s really a question of the potential the show had for being great, and how it falls short of that in many respects that’s so frustrating. Again, if the destination you’re trying to promote isn’t a place that people want to go, then you’ll have to force the issue and make it seem appealing. That’s not the case with Spain, so the contrived nature of the program just begs the question – really, is it that hard to make a great TV program about a road trip in Spain?

What do you think? Are you watching the show? Do you like it? Hate it? Does it make you want to go to Spain?