Art lovers the world over – and even plenty of people who don’t consider themselves serious art aficionados – know that Spain is home to one of the greatest art museums on earth, the Prado. But this isn’t just a fluke – Spain has also given the world some of the most famous artists in history as well. Here are 5 of Spain’s greatest artists. Understanding a bit about the artists of Spain will not only help you better appreciate their work when you see it in Spain’s art museums, but also help you see the country in a different light. So be on the lookout for the work and influence of these great Spanish artists as you travel around Spain.

Possibly one of the best-known painters who ever lived, Pablo Picasso was born in Malaga in 1881 and was one of the founders of what’s known as the Cubist movement. While much of his early work is based much more in realism, many people are surprised when they see something by Picasso that isn’t Cubist – when all the body parts of the subjects are where they’re supposed to be, it doesn’t look like what we expect from Picasso’s work! Picasso studied in Barcelona and Madrid before heading for Paris in the early 1900s. He ended up splitting his time fairly evenly between Barcelona and Paris for some time, although he eventually ended up spending more time in France than his native Spain. It was the German bombing of the Spanish town of Guernica during the Spanish Civil War that brought his emotions back to Spain, however, and which prompted him to paint one of his more famous pieces – the giant Guernica painting. Picasso died in Mougins, France in 1973.

You can see much of Picasso’s early work in the Museu de Picasso in Barcelona, but you’ll need to go to Madrid’s Museo Reina Sofia to see the Guernica. Many of Picasso’s other famous pieces are scattered around the globe, on display in museums in New York, Paris, and London (to name a few). 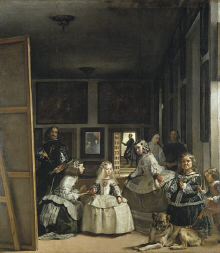 Diego Velázquez was a 17th century painter born in Seville in 1599, perhaps best known for the stunning realism in his portraits. He painted countless portraits of Spain’s royalty, but his masterful touch wasn’t limited to just the upper crust of society – he painted portraits of everyday people as well. After establishing himself as a prominent painter and member of society in Seville, he became a friend of the Spanish royal family in Madrid – he moved to the city and became the favorite painter of the Spanish royals. Velázquez spent some time in Italy, purchasing paintings by great Italian artists and himself painting a portrait of the Pope, but eventually returned to Madrid and lived there the rest of his life. He painted what is widely considered his best-known work, Las Meninas, in 1656 (four years before he died) in Madrid. It’s a portrait of one of the king’s young daughters, but it’s far more than a simple portrait, which is why it continues to thrill art enthusiasts to this day. Velázquez died in 1660 in Madrid.

The paintings of Velazquez hang on the walls of art museums around the globe, but to see Las Meninas you’ll need to go to the Prado in Madrid (where you’ll find a large number of other Velazquez paintings as well). Other museums which boast Velazquez works include New York, London, Edinburgh, and Sao Paulo. 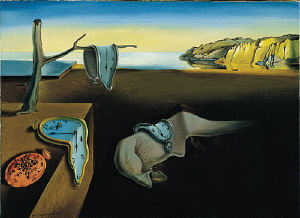 You can’t think of surrealism without thinking simultaneously of Salvador Dalí – his melting clocks and morphing figures are almost as famous as his moustache. Born in Figueres in 1904, Dalí studied art in Madrid and experimented with what he knew of Cubism and Dadaism before eventually being expelled from his art school because he said no faculty member was competent enough to administer his final exams. Dalí then traveled to Paris where he met Picasso. He soon found a kinship with the surrealistic art movement, and his The Persistence of Memory, that painting of melting clocks, is arguably one of the most famous paintings to come out of that movement. His political ties with Spanish dictator Franco (among other things) eventually led the other surrealism artists to expel him from their clique. Late in his life, Dalí lived in the United States, although he moved back to Spain in 1949 and lived there until his death in 1989 in Figueres.

Dali’s works of art are featured in museums all over the world, and unfortunately for visitors to Spain his most famous – The Persistence of Memory with its melting clocks – is in New York’s Museum of Modern Art. His Teatre-Museu Dali in his native Figueres not only houses his crypt, however, it’s also where you’ll find the largest collection of Dali artwork. 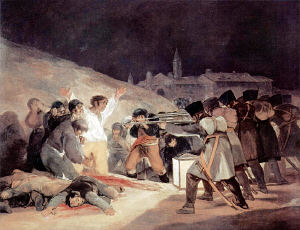 Like Velazquez before him, Francisco de Goya was a favorite painter of the Spanish royal family in the late 18th and early 19th centuries – but his early career was certainly less than promising. Goya was born in 1746 in Fuendetodos, and is often considered the last of the “Old Master” painters. He studied art in Madrid, although he didn’t get along with his teacher and was even rejected from Spain’s Royal Academy of Fine Art twice. He spent time in Italy before returning to Spain and eventually gaining favor with the royal family with his fine portrait work. Goya painted many portraits of royals and other nobles, but his most famous work is The Third of May 1808, which depicts Spanish resistance fighters being killed by Napoleon’s firing squad during the French occupation in 1808. The style of this painting is decidedly different from Goya’s earlier portraiture, which is why he’s not only considered one of the last “Old Masters” but also one of the first of the modern masters as well.

Goya’s paintings can be seen in some museums outside Spain, but to see The Third of May 1808 you’ll need to go to the Prado Museum in Madrid. In fact, most of Goya’s most famous work is in the Prado – including The Second of May 1808 and two paintings of a reclining woman (one naked and one clothed). 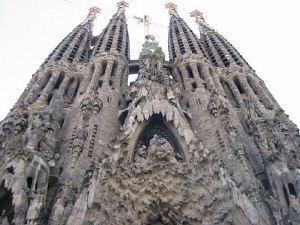 Of all the Spanish artists on this list, Antoni Gaudí is the one whose work is most easily seen – without even going indoors – although his name may be the one least known of these five artists. Gaudí, born in Reus in 1852, was an architect. He studied in Barcelona, and although his teachers weren’t terribly impressed with him, Gaudí began establishing himself as an innovator right out of school. Much of his best known work graces the city of Barcelona, and some say the whole city bears his fingerprints. From the lamp posts in the Placa Reial to the imposing (and yet unfinished) Sagrada Familia church, visitors to Barcelona can see Gaudí almost anywhere they turn. And in addition to public spaces like the gardens of Parc Guell and the unfinished Church of Colonia Guell, Gaudí also designed several private homes in Barcelona, many of which are open to public tours today. Gaudí was struck by a tram in Barcelona in 1926 and died from his injuries three days later.

Gaudi is one Spanish artist you really need to visit Spain to see. Highlights of a Gaudi tour of Barcelona include the aforementioned Park Guell and Sagrada Familia (which they’re hoping to finish in 2026, 100 years after he died) and two of the private homes he designed, Casa Batllo and Casa Mila, or La Pedrera.