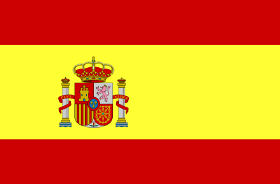 Spain’s national anthem is called “La Marcha Real,” and it’s one of the oldest anthems in Europe. It dates back to the mid-1700s, but its origins are unclear – there isn’t even a composer to whom the anthem can be attributed. The song we know today as the Spanish national anthem was first declared an “honor march” in 1770 by the king, meaning it was played at ceremonial royal events. Because of its association with such events, the song eventually became the obvious choice for the country’s national anthem – this is when it started being called “La Marcha Real,” or “The Royal March.” There was a time during the the 1930s when “La Marcha Real” was replaced by “El Himno de Riego” as the national anthem of Spain, but after the Spanish Civil War the original anthem was reinstated by Franco.

Although Spain’s national anthem as we know it today has no words, that doesn’t mean people haven’t tried to give it words over the years! In fact, there are a few versions of lyrics which have been written for the music – leaders of the country during these times tried to make the lyrics stick, but they were never made official. The last time was when Franco had right-wing poet and novelist Jose Maria Peman write a lyric to go with “La Marcha Real,” but when Franco’s dictatorship was overthrown those lyrics were thrown out with him. Since 1978, the national anthem of Spain has been played once again without any words.

Now, the simple fact that there aren’t any lyrics to the Spanish national anthem doesn’t prevent the raucous crowds at a Spanish sporting event from singing along in their own way, of course. Next time you watch an international soccer match where Spain is playing, for instance, pay attention to the pre-game playing of the anthem. You may not see the players singing, but the crowds will be la la la-ing along with the tune. No one could accuse the Spanish of not being patriotic.

The fact that the national anthem is word-less didn’t sit well with the Spanish Olympic Committee in 2007, however, when they were making a bid for the 2016 Olympic Games to be held in Madrid. They decided their national anthem had to have words, or it would make them look funny. So they had a competition to write new lyrics for “La Marcha Real,” and they received more than 7,000 entries. But only five days after the winning lyric were made public they were withdrawn – the public, it turns out, is quite content to sing along with their anthem in their own way, thankyouverymuch.

Here’s the Spain national anthem in all its stately glory:

And here’s what it sounds like when the Spanish fans are allowed to sing along (I love that you can barely even hear the actual music):

>> See this page for information about various lyrics which have been assigned to “La Marcha Real” over the years, including the one Franco used and the one the Spanish Olympic Committee commissioned in 2008.

>> There are very few countries whose national anthems don’t have words – others are Bosnia & Herzegovina and the tiny city-state of San Marino in Italy.