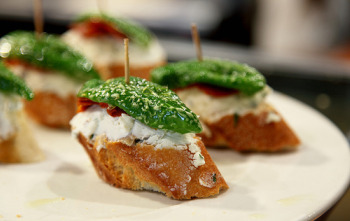 Spanish cuisine is as diverse as it is extensive and colorful as it is flavorful. Spanish gastronomy changes from region to region, and traditional dishes from each place vary depending on what ingredients were readily available in the past. Now, it’s easier to get just about anything in any part of the country, though traditions and favorites definitely still exist in each region. Here’s a small sampling of some of the most typical Spanish foods and drinks you must try when visiting Spain. 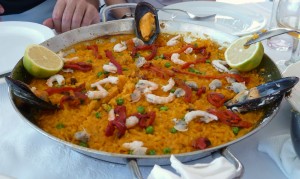 Dubbed the most famous Spanish dish, paella can be found throughout Spain. Traditional Valencian paella is made from rice, meat, snails, beans, green vegetables, and a seasoning like saffron.  Several variations on the classic exist around the country, the most common being seafood paella. This variation omits the veggies, meat and beans, and adds a wide variety of seafood such as mussels, clams, shrimp and fish. Paella is sold in almost every other restaurant in Spain – in varying types and flavors. The best paella is said to be found in Valencia, its birthplace. There are plenty of seafood restaurants in Valencia that serve up outrageously taste paella, especially those in the town of Denia.

Leaving Spain without participating in a traditional tapas crawl is simply unheard of, if not downright impossible. Tapas vary in style from region to region, but they are always small bites served before (or sometimes as a substitute for) dinner. They can be as simple as a skewer of grilled shrimp and pineapple to as complicated as a portion of grilled foie gras topped with onion confit. While tapas originated in Madrid, the Basque people claim to have perfected them, and you’ll find the very best in the seaside Basque city of San Sebastian. 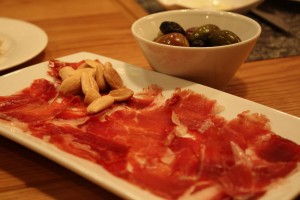 Jamón (ham) and chorizo (sausage) are integral parts of the Spanish diet and there are multiple varities of each. Jamón Ibérico, is made from the black Iberian pig and is a highly prized (and expensive) cured ham. Both Jamón Ibérico and Jamón Serrano (a less-expensive version made from a white pig) are used in many dishes or served in sandwiches for breakfast, lunch or dinner. Walk into nearly any bar in Spain and you’ll likely see a full leg of jamón (which can be worth as much as $500) hanging from the ceiling. You can order a few slices (or by the plateful) along with some bread and cheese for a tasty snack.

Chorizo is a sausage made from pork and pork fat, seasoned with paprika, and smoked, grilled or simmered in a sauce made with cider or wine. It can be spicy or sweet and is served on its own, in pastas and paellas, or in sandwiches. 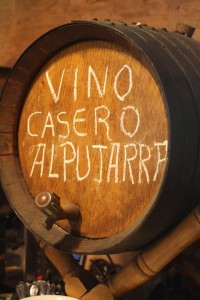 The Rioja region in northern Spain is home to over 500 wineries, many of which welcome guests for tours and tastings. Base yourself in Logrono and visit the small towns of Haro and Laguardia to visit some of these wineries, which can range from small, one-man operations to large, state-of-the-art production houses. Even if you can’t make it to the Rioja area, you can still sample some Rioja wines – which range from Crianza (the youngest and cheapest) to Grand Reserva (the oldest and most-expensive) at any bar or restaurant in the country. Those obsessed with wine might even consider participating in the annual batalla del vino: Spain’s messiest wine battle.

Cava, a sparkling white wine that is Spain’s answer to French Champagne, is produced just outside of Barcelona. A short train ride from the city, you can visit several producers for tours and tastings. You can also enjoy a glass at any bar in Barcelona, or anywhere in Spain, for that matter.

Located in the Andalusia region of southern Spain, Jerez is the birthplace of sherry. A white wine fortified with brandy , sherry is available all over Spain. If you want to taste it at the source, head to the town of Jerez de la Frontera and explore the nearly 50 sherry bodegas in the surrounding picturesque towns. 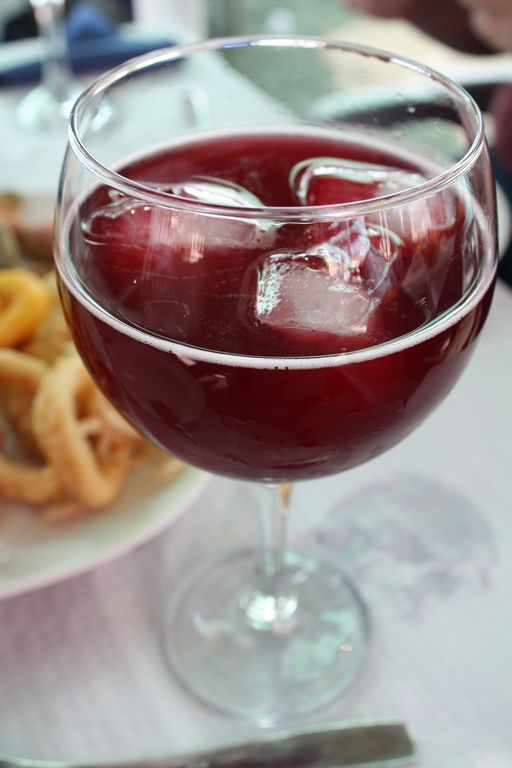 The drink of choice in the Basque region, Sidra, is a traditional alcoholic cider made with several varieties of apples. The drink has been produced in the region for nearly 1000 years and is available all over the region, including in the town of San Sebastian. If you visit a cider house in the Basque country, you can drink it straight from the barrel during a communal cider house meal. Many cider houses are only open during cider “season” though, which lasts from January to April.

Unbeknownst to the tourists who guzzle it by the pitcher-full on hot days, Sangria is very rarely ordered by a local in a bar or restaurant. The reason has a lot to do with what it’s made of – red wine, fresh fruit, and liquor like brandy or triple sec. The wine used in Sangria is often the cheap stuff – the fruit, brandy and other ingredients can mask the poorer quality, so the Spanish consider it a cheap party drink, like the Spanish version of American party punch. Because the price of Sangria in a restaurant is often much more than the drink is worth, it’s generally only ordered by visitors. Locals tend to order the tinto de verano instead – similar to a wine spritzer, the refreshing drink is simply made of red wine and gaseous water or lemon pop.

For more information on Spanish foods:

>> What to Eat in Spain: Famous Spanish Foods
>> The First Timer’s Guide to Tapas Etiquette
>> Twitter Poll: What’s Your Favorite Spanish Food and Where to Eat them?

Photos by flydime, and Nellie Huang.