The 4 Languages of Spain and Where They're Spoken 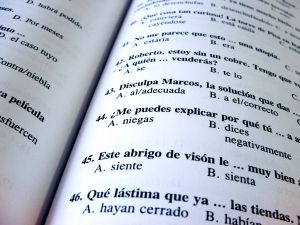 Surprised to find that Spanish is not the only language spoken in Spain? You’re probably not the only one.
Besides the main language, Spanish or Castellano, there are a series of dialects and languages spoken in various corners of the country, out of which three are considered official languages. Granted, you can get by with Spanish almost anywhere in Spain. It is after all the national language, taught in schools all over the country. But language diversity is evident in Spain, especially in far-flung corners of Catalonia and Basque Country.
An even more surprising fact is that over 25% of Spaniards uses other languages other than Spanish as their mother tongue! It’s a mind-boggling fact especially for a country of this size. For decades, the language issue has been a topic of discussion and disparity in Spain.
Here’s a look at the four official languages of Spain and where they are spoken:

The national language of Castilian is official through out the country, and is one of the most spoken languages in the world. Besides Spain, it is also used in Gibraltar, Andorra, Latin America and North America.
In Spain, the language is usually referred to as Castellano (Castilian in English), rather than Espanñol (Spanish). The latin language originated from the ancient Castilla Kingdom that makes up part of present-day Spain. To distinguish the Spanish language from the other official languages, it is thus called Castellano (Castilian).
The Spanish language as compared to other European languages is relatively easy to learn, especially for English native speakers. Many Americans tend to have learned Spanish back in high school, although the Latin American version. There are slight differences between the Latin American Spanish and Spain’s Spanish: in terms of coloquial words used and certain verbs.

Spoken by 600,000 people in the Basque Country, Northern Spain, Euskara or Basque is an intriguing language that does not belong to any group of languages. Considered older than Castilian, Basque is considered a language isolate. It is the only remaining pre-Indo-European language in Western Europe.
As the only language in this list that is strangely different from the Spanish language, Basque is distinctive with verbs and phrases of its own. Even Spaniards from other regions of Spain cannot understand the language.

Almost 4 million people speak Catalan as their first language. This major language is spoken by in the Catalonia region, Arragon and Balearic islands of Spain, as well as parts of Andorra, France and Italy. If you speak Spanish, it is not difficult to understand Catalan. A mix between French and Spanish, Catalan is quite an interesting language to learn and use.
With its roots originating from the Pyrenee Mountains, Catalan reached its peak during the Valencian Golden Age in the 15th century. Today, it is the second most spoken language in Spain, next to Castilian. Catalan can also be split into various dialects – with Mallorquin (spoken on the Mallorca island) and Valenciano (spoken in the Valencia region) most widely spoken.

Galician (Gallego in Spanish) is spoken mainly in Galicia, as well as Asturias and Castilla y Leon in Northern Spain. Out of the 4 million people who speak Galician, 3 million are in Spain, with the rest in Portugal and parts of Latin America. Resembling Portugese, Galician is similar in terms of pronunciation and usage.
Most Galicians find it easy to understand Portugese, and vice versa. The Galician language is also split into three different dialects, according to geographical divisions – eastern, central and western Galician.