Things To Do In Barcelona 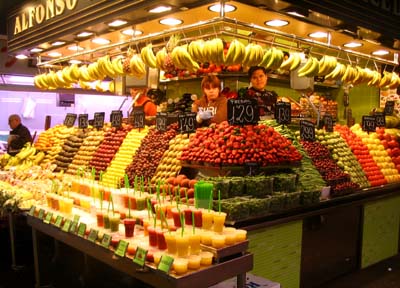 As the capital of Catalonia and the second largest city in Spain, Barcelona holds its own as one of the most fascinating hot spots in the world. One of Europe’s most popular soccer stadiums and a plethora of fresh fruits and veggies aren’t the only aspects that give the city its allure.
With a Mediterranean coast, an exhibition of color on every surface, never-ending palm trees, and the unmistakable Spanish-Catalonian flair, Barcelona is a breathtakingly surreal metropolis that’ll leave its visitors crying, “¡Guapa!” 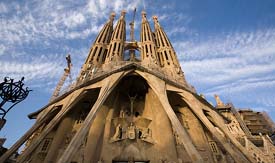 Among Gaudi’s many masterpieces, the Sagrada Familia cathedral has earned a reputation as perhaps the most magnificent. Its production began in the late 19th century and has continued since Gaudi’s death; the city of Barcelona projects that it will be open for service sometime in 2010.
Many areas of the cathedral are not generally open to the public, but those that are certainly merit a visit. The intricate architecture and unmistakable influence from both Gaudi and the Gothic style make the cathedral an unforgettable visual masterpiece. The museum within Sagrada Familia is the most visited museum in Barcelona, so be sure to check it out if you’re interested in finding out more about its construction process.
>>More information on the Sagrada Familia 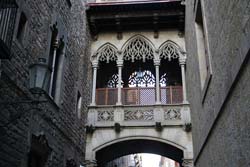 Known to Anglophones as the Gothic Quarter, the area surrounding Sagrada Familia is a collection of courtyards, antique shops, boutiques, and flea markets.
As the old town of Barcelona, Barri Gòtic provides visitors a chance to explore some of the city’s lesser-known sites while getting the opportunity to enjoy local art and music. Not as energetic as the Ramblas, this quarter is the place to take a break at one of the outdoor cafés and soak up the Catalonian atmosphere. 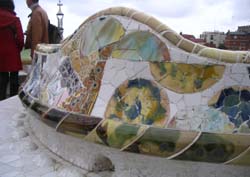 Also created by Gaudi is Park Guell, always a visitor favorite. Despite its name, Park Guell is more of an artistically and architecturally magnificent display, including a few foresty pathways, a large terrace showing off Gaudi’s mosaic-like patterns, a handful of colorful statues, and two unique kind Gaudi-inspired buildings.
Freelance artisans often sit along the winding bench, selling jewelry for as little as 2€; whether or not it’s truly hand-crafted, a pair of painted glass earrings serves as a beautiful reminder of the remarkable Spanish setting. You’ll forget that you’re still in an urban city when standing in this magical story-book scene. 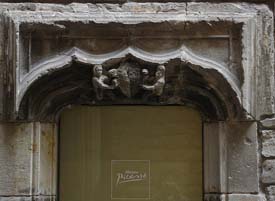 Although not originally from Barcelona, Picasso spent a good portion of his life in and out of the city. In honor of one of Spain’s greatest artists, the Museu Picasso was created to house an enormous collection of his work.
This particular museum distinguishes itself from others by showing not only Picasso’s most famously bizarre pieces, but many of his early paintings as well. The museum is set up as a chronological art gallery, starting with his original work and moving through his life to his final paintings; viewers are given the chance to see the artist’s unique progression through his art. Also on display are exhibitions presenting the works of artists similar to Picasso. 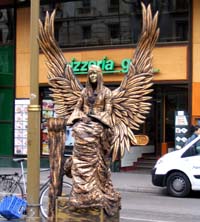 This one-mile stretch is an enthralling boulevard of people and sound, color and aroma. You’ll find everything from fabulously designed buildings to outgoing street vendors. The packed assortment of businessmen, wanderers, and street performers create an eye-catching mixture of activity.
Beware of pick-pockets, but don’t let the hustle startle you away from the unbeatable energy. Instead, imagine La Rambla as an ongoing street fair giving Barcelona the right amount of panache. Stop in La Boquería, the open-air market, on your way down the strip to grab a snack. The irresistibly mouth-watering fruit (that seems to stay in season all year ‘round) alone is worth it: whether you buy a handful of kiwi or purchase a cup of freshly squeezed juice pineapple, the price stays low and the satisfaction hits an all-time high. 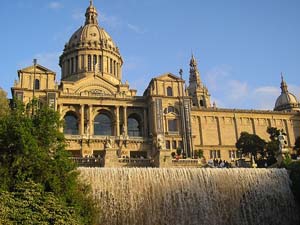 The large hill overlooking the city once acted as host to the Olympic summer games. Now it remains a not-to-be-missed site for tourists hoping to get a panoramic view of Barcelona as well as the chance to discover more of its history and culture.
You’ll find the National Palace, several museums, the Olympic stadium, a famous cemetery, the Magic Fountain, botanic gardens, and more. While the Barcelona ground floor puts you among the everyday culture, Montjuïc pulls travelers into the city’s spectacular majesty.

FC Barcelona football club museum is the fourth most visited of the museums in Barcelona, thanks to the loyal following of FC Barcelona football team. With sporting artefacts from the club dating back 100 years, the museum not only gives a peek into modern day football world but also Spanish sporting history. To visit its museum, there are two types of admission fee. The first allows access to the museum and the pitch area of Camp Nou Barcelona Stadium. The second type of ticket includes a guided tour of the changing rooms, press rooms, VIP lounge, and the pitch at ground level. You’ll also get a chance to sit on the players benches and see what it’s like to sit in the best seats of the stadium.

Bike tours have become a popular alternative to both bus and walking tours. Fat Tire provides several bike tours in Barcelona, in English and Spanish. The logistics sound strenuous – biking around the city for four hours under the blazing Spanish sun. In truth they are relaxed, enjoyable, and meant to cater to those of us who simply know how to sit on a bike and pedal.
The expert guides keep visitors informed, entertained, and safe from surrounding traffic. The Barcelona bike tour hits even more city highlights, including Parc de la Ciutadella and the beach; frequent stops allow time for pictures, exploration, food, and stretching. The Fat Tire experience is unmatched and a must for any traveler desiring to see the city in an entirely unique manner.
Photo credits: 1 by sarahtate, 2 by c h e e s e roc on Flickr, 3 by jcorrius on Flickr, 4 by sarahtate, 5 by uayebt on Flickr, 6 by sarahtate, 7 by vito7 on Flickr