Things to do in Bilbao 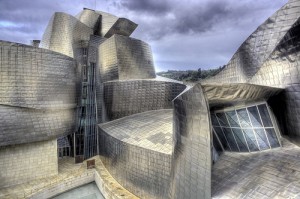 Once reputed as an unattractive port city, Bilbao is quickly shedding its industrial shelf and transforming into a modern metropolis. Since the construction of the world-famous Guggenheim Museum Bilbao, the city now wears a new, stylish look decorated with psychedelic architecture, developed infrastructure and a booming art scene. Located in the province of Biscay, Bilbao is the capital of the Biscay province in Northern Spain’s Basque Country region.
Poised along the Nervión River, the city of Bilbao has strived hard to become what it is today: a modern riverfront city. Besides the avant garde architecture, you can enjoy the new-found beauty of this Basque Country capital along its swanky waterfront walkways and high-end shopping boulevards. Looking for a taste of traditional Spain? Head to the Old Town and you’ll be lost in a world of Gothic churches, medieval plazas and some of Spain’s oldest pintxo bars.
If you’re thinking of spending a weekend in Bilbao or making a stopover here enroute to France, these are some quintessential things to do in Bilbao.

Voted by many as the single most impressive work of contemporary architecture in Spain, the Guggenheim Museum in Bilbao features eclectic designs and boundaries-breaking styles. The avant-garde building designed by the American architect Frank O. Gehry is a massive contribution to Spain’s bourgeoning contemporary architecture scene.
As one of the most talked-about museums in Spain, the Bilbao Guggenheim Museum stands out for the contemporary artwork it houses. The Guggenheim is one of several museums belonging to the Solomon R. Guggenheim Foundation and it displays permanent and visiting exhibits of works by Spanish and international artists. Several masterpieces  exhibited here have been signed by artists such as Chillida, David Salle, Jeff Koons, Louis Bourgeois and Robert Rauschenberg.
The museum is open from Tuesday to Sunday from 10 a.m. to 8 p.m. and is closed on Mondays. General admission is €10.50 (adult).

Besides the Guggenheim, another important museum worth checking out in Bilbao is the Bilbao Fine Arts Museum (Museo de Bellas Artes). As one of the most significant painting and sculpture museums in Spain, the museum showcases an extraordinary variety of art works. Its collection currently boasts more than six thousand works including paintings, sculptures, drawings, engravings and objects from the decorative arts. Contributions from local institutions, fprivate individuals and the museum’s own acquisitions helped to shape the profile of the collection and oriented its subsequent growth. For the arts-lover, this museum is an essential stop.
The musem’s opening hours are from Tuesday to Sunday, from 10 a.m. to 8 p.m. Admission fees are €6 (adults) and €4.50 (students). 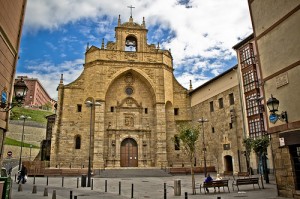 Like every other city in Spain, Bilbao has its own Old Town (Casco Viejo). The Old Town sprawls between the San Antón bridge and the church of San Nicolás and is a jumble of characteristic old buildings, museums and churches. Linked by five bridges to  the new town, the area is easily accessible by foot. The heart of the old town circles around the “Siete Calles” (“seven streets”) – – with countless  boutiques, bars and cafes. Paseo del Arenal, the main artery of the Old Town, divides the area into two. Nearby you can visit the Teatro Arriaga, built in 1890 and now renovated to become the cultural hub of the city.

Doña Casilda Iturrizar park is a sprawling, leafy park in Bilbao’s central neighborhood, Indautxu. Named after Casilda Iturrizar who donated the land, the park was the only lung of the city until a few years ago. Created over 100 years ago, the English-style garden features various vegetations and a duck pond with several species of waterfowl. There is also a cybernetic fountain that offers annually sound and light shows during the holidays, surrounded by a large space where concerts are held and a pergola. The Bilbao Fine Arts Museum is found within the grounds of  the park.

The basilica is one of the most attractive Roman edifices in Bilbao. Located in the district of Begoña, the pilgrimage church is easily reached by taking the lift from behind the church of San Nicolás. There is also a footpath (20minutes’ walk) to the top of the hill, from which there is a good view of the city. The church, built in the 16th century, has an image of the Virgin of Begoña, patroness of the city, and an interesting painting of “The Pilgrimage of Begoña”. The church is opened from Monday to Saturday 10.30 a.m. to 8.30 p.m..
Flickr photos by Wojtek Gurak, agirregabiria.