Things to do in Madrid

Madrid, the capital city of Spain, is rich with history, culture and color. It has impressively maintained a balance between the old and the new, continuing to exhibit gorgeous classical architecture in addition to modern and fresh-looking structures. Literally located in the middle of the country, it is a great take-off point for touring the nation. But while spending time within the city, there are an endless amount of experiences to keep you entertained and occupied. 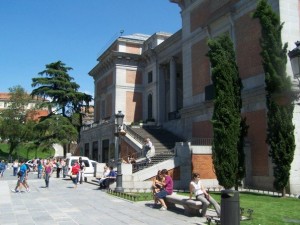 Although Barcelona is better known for its art collections and modern galleries, Madrid boasts two museums that would put Barcelona art history to shame. The Museo del Prado art museum is a phenomenal structure with some of Europe’s highest regarded works from well-known names such as Francisco Goya, El Greco, Rembrandt, Caravaggio and Botticelli, to name a few. This site even has the famous “Garden of Earthly Delights” painting by Heironymous Bosch, which you could literally examine for hours, and you very well might.

Another site worth visiting is El Reina Sofia art museum. This site is a tribute to Spain’s greatest artists, although it does house a few foreign names. Some of the better-known works shown here include Picasso’s “Guernica” and Dali’s “The Persistence of Memory”, which if seen in person, puts all those mass-distributed dorm posters to shame. The museum itself is also quite stunning including a glass elevator for an entrance and modern architecture that plays with the elements of natural lighting.

The Real Madrid Football Stadium is one of the essential things to do in Madrid, especially if you’re interested in getting a deeper understanding of the Spanish culture. European football is a staple of Spanish life and in the right season, will dominate the entire city of Madrid. Tours are given of the arena when games aren’t being played and tickets are available to the public when games are. In May 2010, the stadium will host the Champions League final, which will crown the champions of European club football.
The area around the stadium is home to numerous football bars for those looking for a truly local experience or simply those unable to get a ticket. The area is definitely worth a visit just to see the structure itself which towers over the square that houses it. 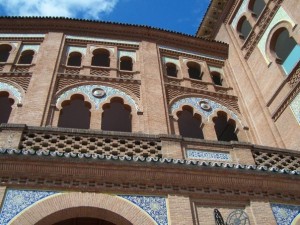 Animal sympathetics beware, the bullfighting arena or the Plaza de Toros, in Madrid still practices the same classic conflicts of matador vs. beast in this tragically beautiful Moorish arena. If you’re up for it, shows take place everyday from March to December at 6 or 7 pm, although the peak of the season is in May or June during the San Isidro Festival. The arena has a seating capacity of 25,000 people, and is usually full to sold out. For the actual “Running of the Bulls” festival, you’ll have to make a trip to Pamplona, but the best actual fights take place right here in Madrid.

Renowned for shopping, tourism and an annual new years festival, this neighborhood is a frequent haunt for foreign visitors. This is also the point from which all of Spain’s major roads originate: kilometer zero – this explains why Puerta del Sol is one of Madrid’s main public squares It has some of the more commercial elements common to tourist traps, as well as street performances and a younger local scene. But if you brave the common hoards long enough to veer off a random side street, you’re sure to find yourself on a quaint road littered with garden balconies and picturesque laundry lines hanging above your head. Puerta del Sol also has some of the cheaper accommodation central to the city and has some relatively nice hostels for the backpacker scene. 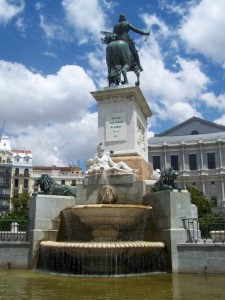 Madrid’s Palacio Real, or Royal Palace, is the official residence of the King and Queen of Spain but part of it is kept open to the public. The courtyard displays fantastic views of the city and countryside through ancient aquaducts that line the cliff. The majestic building enables a walk through the old medicine cabinet with massive shelves lined with ancient herbs, concoctions and containers, as well as entry to numerous main parts of the palace including the throne room, dining room and ballroom, all of which are absolutely breathtaking.

Each salon is different and usually has some kind of magnificent fresco either on the wall or ceiling, in addition to velvet and gold adornments at immense heights above your head. The palace is white on the outside and surrounded by beautiful gardens, kept perfect throughout the year. This site is definitely worth stopping by and a self-guided tour around the grounds is highly recommended.

If you’re looking for some more cultural nightlife earlier in the evening, you can catch a ballet or opera at the historical Teatro Real. Famous ballet troupes, such as Diaghilev’s Russian Ballet, often performed here when traveling through Spain. Although the theater has been remodeled in the 90’s (in order to enable operas to be performed once again rather than just orchestras), the building still maintains its original architecture. Elegant and antique, the house gives tours to those interested in the history of the structure itself, rather than just the performances.

One of the best ways to see the sprawling city of Madrid is on two wheels. Bike tours in Madrid give you a chance to see the emblematic buildings, monuments and places of interest of Madrid at a leisurely pace, without the manic crowds and rush hour traffic. City tours by bike are very popular these days, especially with young, active travelers. There are also several parks outside of the city center, easily reached on bicycles. What’s best about a bike tour in Madrid is that it gives you a chance to be active, enjoy the outdoors and see the city at the same time. 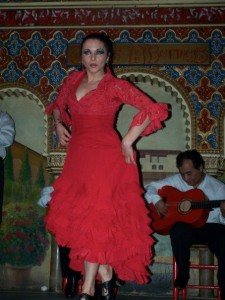 No Madrid trip would be complete without a night out enjoying some tapas, drinks and of course, music. You’ll find no lack of these types of places in the streets of Madrid. Surprisingly, however, many of the restaurants that claim to have Flamenco music don’t always also have the dancing! But one place you can be sure to have delicious food, excellent wine, and most importantly, a phenomenal show is Torres Bermejas in the Gran Via neighborhood. This flamenco bar has a fixed price meal and show. Alternatively, you can just pay for the show and receive a complimentary drink, but the food is definitely worth the price.

The venue is located in a small basement in which the walls and ceiling have every inch tiled with beautiful Moorish mosaic designs. The small tables and chairs surround a tiny wooden stage that comes to life when the dancers appear. The performers are passionate, romantic and super sweaty, constantly gyrating while your eye level is strategically placed to see the rapidity at which their feet ricochet off the stage. The music is moving and the performers are completely captivating, so make sure to remind yourself to eat before your food gets cold.

There are plenty of choices for day trips from Madrid as it is strategically located in the center of the country. One of the more worthwhile trips to take is to the small village of Segovia.

Segovia is a fantastic hamlet about 2 hours north of Madrid by train. Here cobblestone streets trail up a small hill, winding between churches and colorful residences, culminating at a spectacular palace at the top of a cliff that the Royal Family still uses as a summer retreat. Aquaducts and spectacular hikes make this small town visually outstanding to even the most frequent visitor. Just make sure you plan accordingly for siesta, as the whole town shuts down from about 2-5 for their daily afternoon nap.

>> Here’s how to get from Madrid to Segovia.

Other popular day trips within 90 minutes of the city are Toledo and Avila.