Things to Do In Seville 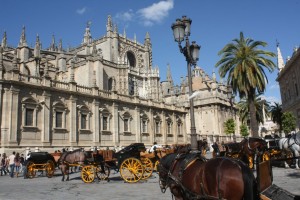 Seville is a stunning place to visit no matter what time of the year you arrive here. It is the capital of Andalusia and is going to win your heart with its rich décor, quaint streets and remarkable architecture. If you are in search of a place that is culturally rich, Seville is definitely the place to explore.
What you will manage to see and do in Seville depends on how long you’ll be here for. If you are on a short vacation or simply stopping by, there are plenty of attractions in Seville that can make your trip worthy and memorable. Those on a budget will be thrilled to know that Seville is one of the cheapest cities in Spain to visit and there are plenty of free things to do in Seville. If you’re short of time, check out our 2-days in Seville itinerary suggestions.

The Seville Cathedral, with its blend of both Islamic and Christian structural design, is one of the most magnificent monuments in Spain and the largest in the whole world. Constructed on the location of a former mosque, the Giralda tower was once a minaret. The cathedral was built to demonstrate Seville’s wealth, as it had become a major trading center in the years after the reconquest. The builders of the cathedral decided in July 1401 to build a new temple, as the ancient Muslim mosque was in bad shape after the 1356 earthquake. Today, the cathedral and the Giralda both make for an excellent lesson in Spanish history. 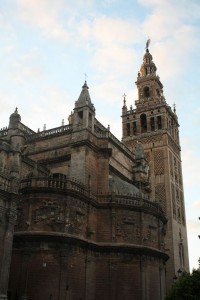 Formerly a Moorish fortress, the Alcazar is a royal palace built in the XIVth century. First constructed by the Almohades, the royal palace retains traces from its Islamic origins. The palace is one of the best remaining examples of mudéjar architecture. Subsequent monarchs have added their own additions to the Alcázar. The upper levels of the Alcázar are still used by the royal family as the official Seville residence and are administered by the National Patrimony.With numerous courtyards, ponds and beautiful gardens, the Alcazar will keep you busy for many hours.

Cross the stream and go to the old gypsy area of Triana, where you can find the finest flamenco bars. Though the precise beginnings of flamenco are unidentified, this quarter of Seville absolutely played an important role in its establishment. Many say that Seville is the best place in Spain to watch a flamenco show. One excellent tablao to watch a flamenco show for free (you only pay for your drink) is La Carboneria. Located in the labyrinths of the Santa Cruz neighborhood, the flamenco cave has an unbeatable ambience and some of the best dancers in town.
For the culture vultures interested in catching more glimpses of flamenco in Seville, try to time your trip to coincide with festivals in Seville. You’ll find many establishments putting up free flamenco shows during these festivals. 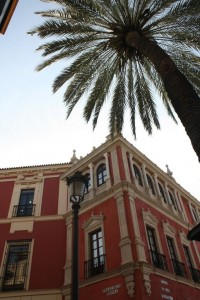 Go on a Day Trip

Seville is perfectly situated in the Southern Central part of Spain. It’s midway between the mountains and beaches, making for an excellent base to explore the surrounding region of Andalusia. From Seville, it’s easy to take several day trips by car or bus. The gorgeous cities of Granada and Cordoba are both within a few hours from Seville. Since they are packed with so many attractions and World Heritage Sites, they deserve more than just a simple one-day visit; but if you’re short of time, even spending one day there would make it worth the trip.

Have a taste of the finest cuisines of Spain in expedient bite-sized morsels: indulging in tapas is almost a kind of culinary art in this part of Spain. Spanish tapas is at its best in Seville, from the typical staples to haute cookery in an elegant modern establishment. At every street corner, you’ll find a tapas bar roaring with energy. Choose from the quintessential tortilla de patatas or boquerones or salmoreja (cold thick tomato soup originated from Seville) – you sure won’t be disappointed.

Next to Ronda, the city of Seville is perceived as the origin of bullfighting. Though bullrings in many places in Spain exist mostly for travelers than locals, Seville still draws the attentions of many die-hard fans. If you’re hoping to catch a bullfight here in Seville, be sure to time your trip according to the bullfighting season. Most fights take place during the Feria de Sevilla (annual fair that takes place in May). Ticket prices vary largely, but try to get your tickets online or at the bullfighting ring in advance. 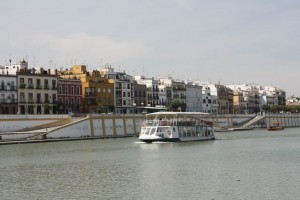 Witness the quieter part of Seville in Park Maria Luisa, but never before taking a glance at the marvelous Plaza España. The latter was once used in the scene of Star Wars Episode II. Located slightly outside of the historic quarters of Seville, the plaza is set against a leafy backdrop. The monument features gorgeous mosaic tiles depicting scenes from Spanish history as well as background of all the major Spanish cities.

Take a cruise down the river that separates Seville, or wander along its banks enjoying the sights and the cafes. Cross the river to the side of Barrio Triana and experience the Calle Betis nightlife in this part of the town. Along the riverfront, you’ll find a myriad of bars ranging from traditional cafeterias to swanky high-end restaurants.

Take a break from the extravagant Alcazar and Cathedral to discover the neighborhood of Santa Cruz. The charming labyrinth-like district is packed with charismatic shops, secret alleys and traditional art boutiques. You can either stop for the tapas or admire the stunning buildings of one of the most attractive residential regions in Spain. For those looking for something a little quieter, visit the district of Macarena instead.
Read more about:
>>Getting from Madrid to Seville
>>Cheap Flights to Seville