Things You Should Know About Seville 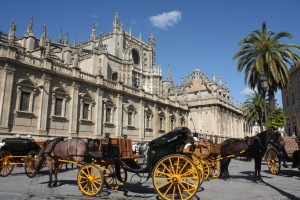 Contrary to most people’s belief, Seville is not all about flamenco, bull-fighting and Holy Week celebrations. Granted, Seville is the birthplace of flamenco and bull-fighting – you can find the best performances, spectacles and festivals in Spain – but there is more to the city than that. Packing in both old and new into one city, Seville is definitely a city of this century – its tram system is one of the best in Spain and its public infrastructure are unbeatable.  For those who are seeking to find the authentic Spain, you’ll find it here; and for those hoping to see how Spain has changed over the years, you can also find traces of that here. Prepare to uncover a versatile and diverse city – Seville won’t disappoint.  Here are some things you should know about Seville to help prepare you for a better understanding of the Andalusian capital.
It’s cheaper than most major Spanish cities.
As compared to other Spanish cities, Seville is rather affordable. Andalusia is one of the cheapest states in Spain – and Seville being the Andalusian capital is no exception. Food, museum entrance and hotels in Seville are generally cheaper here than Madrid or Barcelona – expect to pay from 10 to 15euros for a standard restaurant set lunch (menu del dia), 15 to 25 euros for a hostel bed and 55 to 70 euros for a simple hotel room.  On top of that, the list of free things to do in Seville is endless.
Expect to find modern commodities in Seville.
Besides the old town, Seville sprawls across a large urban area, with numerous communities in the city’s outskirts. In Seville, you are not just limited to the cobblestoned Santa Cruz barrio – there is a range of entertainment facilities and commodities to choose from. If you’re looking for something close to home, you can surely find it in Seville – whether it’s American food at TGIFs or electronics at Media Markt.
Don’t expect to find everyone in Seville dressed in flamenco skirts and bullfighting costumes.
This might sound silly, but many travelers still have the misconception, or stereotype, that Sevillanos are often involved in either flamenco or bullfighting. Most of them have grown up with such age-old cultural traditions. On the contrary, many modern Andalusians are against bullfighting, deeming it as an act of animal cruelty.
Seville gets really hot in summers.
Seville might be an attractive, seductive and historically rich city extremely popular with both local and foreign visitors; but come summer, the city is as baking hot as an oven. With temperatures soaring up to 45 degrees Celsius, Seville is considered to have one of the hottest climates in Spain. What’s worse is that it doesn’t have a beach to allow some cooling breeze – although the nearest beach is just 1 hour away. When mercury’s rising, local youths head out to the Guadalquivir River bank and lounge on its grass in their bikinis and tanktops.
Sevillanos are said to have the most difficult-to-understand accent in Spanish.
Truth betold, even the Spaniards themselves agree with this statement. Andalusia claims fame as the Spanish state with a spoken Spanish that’s most difficult to understand for a foreigner. Out of the Andalusians, Sevillanos are claimed to have the strongest and thickest accent when speaking Spanish. They tend to drop the ‘s’ from every word and have a melodic accent when speaking Spanish. They say if you learn your Spanish in Seville, you’ll have no difficulties understanding people elsewhere in Spain.
Don’t expect people to speak English or your language.
Many travelers make the common mistake of expecting other people to speak English when traveling.  Most Spaniards learn English at a young age in school, but unfortunately many of them are too shy to use the language. Don’t forget that the official language in Barcelona is Catalan, a completely different language to Spanish. Try to pick up a few words in Catalan, and the locals would be more than happy to help you out or even have a conversation with you.