From white stretches of sandy coves to trendy, jam-packed city beaches, there is a plethora of beaches to choose from along the sun-kissed coastline of Spain. For decades, Spain has been known as the sun-and-sea destination in Europe thanks to its 300 days of sunshine each year and cheap airfare to other European destinations. As a playground for holidaymakers, the Spanish coastline is strewn with miles of gorgeous turqoise waters and world-class resorts. With summer just around the corner, it’s time to put on your bikini and take the plunge with us as we unrevel 6 of the best beaches in Spain. Shhh… let’s just keep this to ourselves, shall we? 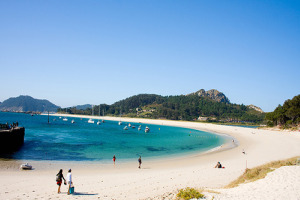 Forget about the overcrowded Costa del Sol, this remote island along the gorgeous Atlantic Coast of Northern Spain is sprinkled with quiet and untouched beaches. Thanks to the conservation efforts of Spanish authorities, the isle is now an uninhabited national park. No hotels are allowed to be built yet, but the budget traveler will be happy to find a campsite with a million-dollar view. Just a 40-minute boat ride from the fishing town of Baiona in Galicia, the island is opened to public only in summer.

Andalucia’s biggest coastal nature reserve, Cabo de Gata-Níjar, has a plenitude of wild and jagged coastal beaches to top the list of Southern Spain’s best beaches. The landscape here is starkly different from the rest of Spain, with dry, desert-like terrain reminiscent of the wild west.  One of the most well-known beaches is Playa del Mónsul, where parts of the Indiana Jones movie were filmed. In the middle of the turqoise waters stand a massive rock that act as a plunging board for the daredevils. 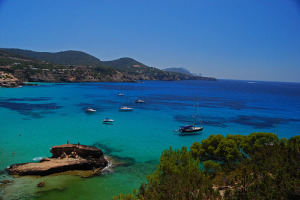 If you think Ibiza is all about raucous parties and all-night-long clubbing, think again. You’ll be surprised to find stunning and pristine playas here tucked behind rocky sandstone cliffs. Cala Tarida is just one of the many hidden bays that are remote enough for a solitary sunbathe and to escape the crowds. The bay extends over a stretch of rugged outcrops, so expect to find secret coves of crystal clear waters and marine life perfect for snorkelling.

Another personal favorite of mine, Playa Papagayo borders between an isolated wild beach ideal for the relaxed traveler and a thrilling adventurer’s playground. Although the hiking trail that leads to this bay is far from being challenging, the entire area is a national park pimpled with terrain best for mountain biking and hiking. This national park is only accessibly by car or bike, but it is still within a 5-minute drive from the closest beach town.

Blessed with picture-perfect landscapes, Menorca is an island chocked full of isolated coves and virgin beaches. Unlike its neighboring islands in the Balearic, it is far quieter – and with far lesser tourists in summer. Powerful waves have given its shoreline that unique and rugged look. At Cala de Algaiarens, the adventurous ones will have a ball of a time scouting out its craggy coastal cliffs. The water is sparkling clear, so bring your snorkeling gear along to explore the underwater caves.

Voted by many (including the Spaniards) as the top city beach in Spain, Playa de la Concha sprawls over the outskirts of San Sebastian city. As one of the quintessential things to do in San Sebastian, the sandy patch of oasis is just a 10-minute walk from the city.In summer, it can get difficult trying to find an empty spot for some sunbathing. Connected to adjacent beaches Playa de Ondarreta and Playa de la Zurriola by waterfront boulevards, you can easily hop from one beach to another to enjoy different landscapes and ambiance. Ondarreta beach is slightly smaller, with shallow waters that are perfect for kayaking, while Zurriola promises some strong waves great for surfing.
Photo credits: Pablokdc, lonesnapper, MontanNito.
Read more about:
>> Beaches in Spain
>> Ibiza Beaches
>> Tenerife Beaches
>> Mallorca Beaches