Visit Spain for the World Cup 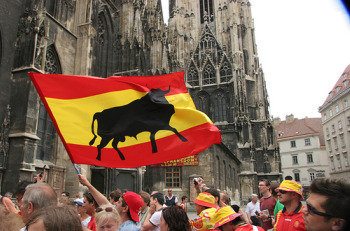 Can’t make it to South Africa to cheer on the Spanish team? Head to Spain instead. Summer is the perfect time to visit, especially for a fan who wants to cheer on the team.
In the north, cities like San Sebastian and Barcelona are alive and waiting to be explored during the long, hot days. In the Rioja wine region, the vines are heavy with grapes, and along the southern coast, the beaches are full of beautiful people who’ve come to frolic in the sand and surf.
And this summer, there will be even more excitement in the air, as Spain heads to the World Cup. Cozy up in any pub and watch Spain at the World Cup, just be sure to wear your Spain World Cup jersey or your Spain away jersey while you root for the team.
You definitely don’t want to appear to be cheering on another team while on home turf! But make it clear that Spain’s your team and you’ll soon be making new friends for tapas-crawling or hitting the beach with.
Where you choose to go in Spain for the World Cup is up to you. In cities like Madrid and Barcelona, the party will be bigger, but you may find that cheering along with just a few people in a tiny bar in a small town in Andalusia or the Basque region is just as fun. No matter where you end up in Spain, just be prepared to encounter some fanatic fans.
Photo by astique