Wacky and Unique Festivals in Spain 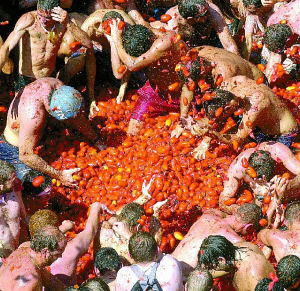 From the messiest food fight ever, La Tomatina, to the bizarre fires at Las Fallas, Spain is home to some of the craziest and most unique festivals in the world. There’s no doubt that the Spaniards know how to party, but to throw tomatoes or splash wine at each in vigour? Only the Spanish can do it in style.
Most of these festivals started out in honor of various patron saints, but with time, they slowly evolved into massive fiestas that involved firecrackers, bulls and even food items. If religion and tradition are not up your alley, then you are better off getting down and dirty at these festivals. Many of them take place in summer – when almost the entire country is on vacation and when the weather is hot, hot and wayy too hot. So put on your goggles, swimsuit or whatever armour you’ve got and prepare for the dirtiest, messiest and oddest festivals in Spain.

Every year, on the fourth Wednesday in August, throngs of people crowd into the little town of Buñol in the Valencia region to begin pummeling one another with overly ripe tomatoes. The whole festival lasts for a week, and includes music, parades, and fireworks – and on the night before the tomato fight, there’s a big paella-cooking contest. The tomato throwing portion of La Tomatina only dates back to the mid-1940s, but it remains one of the most popular annual events in the region, drawing tourists from throughout Spain and from many other countries as well, although the tomato fight itself lasts for only one hour.
>> Read more about La Tomatina. 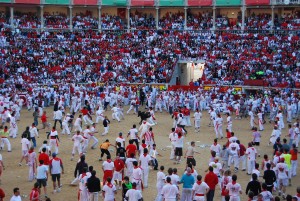 Festival of San Fermin: Running of the Bulls

The annual San Fermin Festival kicks off on the 6th July each year in the town of Iruña, Pamplona. It is most well-known for the Running of the Bulls – an event where revelers from all over the world run in front of a ferocious herd of  bulls. The event attracts over 1,000,000 spectators each year, all vying to catch a glimpse of the action. Besides this attention-catching event, San Fermin is also celebrated with parades, such as the Gigantes y Cabezudos (giant-sized and giant-headed characters). Dancers and street performers also take to the streets, along with folklorical music playing in the background.
>> Read more about San Fermin: Running of the Bulls. 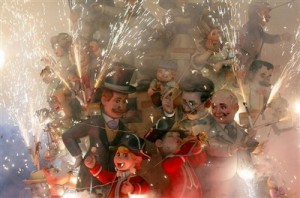 Las Fallas de Valencia – literally translated to mean ‘the fires’ in Valenciano – is a massive festival in Valencia, celebrated in vigour and awe every March. The festival is focused on creating huge cardboard, wood, papier-mâché and plaster statues that are referred to as “fallas” or “ninots”, and then setting them on fire. Substantial effort is put into making them look realistic; most of them depict a myriad of daily-life characters and topics such as corrupt politicians and celebrities. Las Fallas is a very labour-intensive festival, with the giant statues taking up to a year to prepare and can cost up to $60,000. A year-round effort is placed into making the festival a success.
>> Read more about Las Fallas de Valencia. 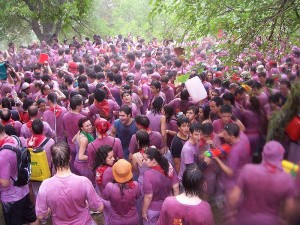 Instead of drinking and savoring red wine, the people of La Rioja region prefers to splash them all over the place. The idea is to get everyone really wet, sticky and tasting of wine! On the 29th June each year, the village of Haro in La Rioja celebrates this unique festival in style. Festival-revelers dorn in white gather in the city’s old quarters where wine pours onto the crowd in abundance. The crowd turns into a beautiful shade of purple as wine wreaks havoc in the city. La Batalla del Vino is a an indulgent festival, where children and adults alike frolick in wine.
>> Read more about Batalla del Vino.
There are just too many wacky festivals in Spain to be covered in one single post, so look out for the second series of the oddest and wildest festivals in Spain!
Photo credit: Flickr photos by LpstkLibrarian , EpicFireworks and Wikipedia.