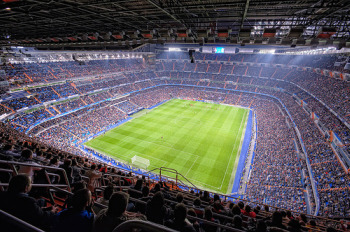 Long hot days, delicious tapas and wine, avant garde art, beautiful beaches…and even more beautiful Spaniards. Here’s one more reason to head to Spain this summer – the 2010 Champions League final will be held in Madrid on May 22, 2010 at the Stadio Bernabeu.
For soccer fans who can’t make it to South Africa for the World Cup, here’s your chance to see your favorite players in action. If you’re heading to Spain to watch the game, check out our resources for cheap flights to Spain and cheap Madrid hotels. Summer high-season won’t have yet begun by the date of the game, so there’s a good chance you can find affordable flights and accommodations, no matter what your budget.
Once the game is over, you’ll find plenty of things to do and see in Madrid, like the Reina Sofia museum and Plaza Mayor. You can hop on the high speed train and be in Barcelona in under three hours, and from there you can wine and dine in the Rioja wine region or the culinary wonderland of the Basque country. Of head south, to the hill towns of Andalusia or the stunning beaches of Costa del Sol. No matter which area you pick, you’ll enjoy fewer crowds and lower prices in May and early June than later in the summer high season.
Photo by marcp dmoz