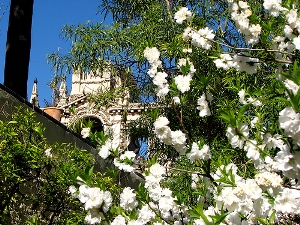 Together with Portugal, which borders the country to the west, Spain forms a large peninsula south of the Pyrenees. To the west and north it borders the Atlantic Ocean and to the east and south the Mediterranean Sea.

The large size of the peninsula together with the different influences from the ocean and the city results in a variety of climates, hence it’s a mistake to say that the typical Mediterranean climate can be found all over the country.

It’s the rainiest and cloudiest part of Spain being heavily influenced by the Atlantic Ocean. The summers are still warm and sunny but the cooler and cloudier days are more frequent than anywhere else in Spain.

Rainfall is rather low but it snows heavily in the mountains. The summer is hot and dry. Although spring and early summer are the wettest seasons, the rain falls in short and heavy showers. Hot winds and dust are the most unpleasant features during summer. However, the low humidity makes the high temperatures bearable.

This is the area famous for the tourists resorts located at Costa Brava and Costa del Sol. Winters are milder and warmer than inland, while the summers are hot and sometimes humid, but the breezes temperate the heat in the afternoon.

The Balearic Islands, which include Ibiza, Menorca and Majorca) have a climate similar to the one in the southern part of Spain.

Due to their position in the Atlantic Ocean, the summer temperatures in the Canary Islands are rarely very high, while the winters are mild. Sometimes during winter the weather can be rainy but it doesn’t happen too often.

Unless you are in Andalucia or on one of the islands, the weather is cold. The coldest temperatures can be found in the countryside around the big cities, such as Madrid, Salamanca or Toledo. However, in Madrid it’s common to find warmer temperatures (a so called “mini heat wave”) in January or February so it’s possible to stroll around in the city wearing just a coat.

Spring has beach weather. Too bad the weather is not too dependable. For example, even though in Madrid you can find really nice weather in March, you can’t guarantee the sun and clear weather until June.

While the inland cities have very hot weather, everyone seems to flock to the coast where the weather is cooled by the breeze and doesn’t reach extremes. In the cities, most of the cafes will be closed –mostly in August – although all museums and galleries are opened; so you won’t waste your money on nothing even if you decided to visit the cities now.

Similar to spring, the weather is still warm enough to go to beach –at least in September at Costal del Sol and Costa Brava – but you won’t get “fried” if you wonder around the cities.